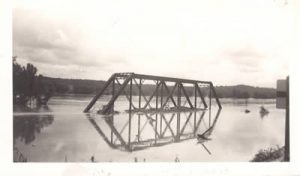 Many people in the mountains of Appalachia vividly remember September, 2004. During that month, the rains and winds of Hurricanes Frances and Ivan combined to swell the French Broad, Catawba, and Pigeon Rivers to record flood levels. Several fatalities and millions of dollars of damage resulted. But few residents recall an earlier event of similar proportions that devastated our region. That memory failure is because the last time such flooding overwhelmed our mountains was over 60 years ago, in 1940. Furthermore, it is necessary to go even further back, to 1916, to find a second flood that rivals the devastation experienced in 2004. Few natural catastrophes cause such widespread destruction as floods. The ones that occurred in 1916 and 1940 rank with those of 2004 as among the most challenging and destructive natural events to buffet the rural communities of Western North Carolina.

By the early 1900s, railroads had penetrated the mountains of North Carolina. The citizens of the region were enjoying increased contact with faraway places. The area was widely recognized as a tourist destination, a health retreat, and rich in natural resources. Nothing seemed to be able to slow the rapid progress being experienced by even the most remote communities. Nothing, that is, except Mother Nature.

A 1917 Southern Railway publication reports of the 1916 flood: 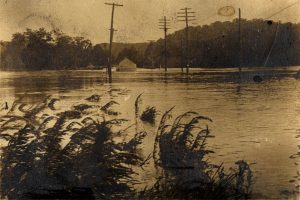 “On July 5th and 6th a tropical cyclone swept over the Gulf Coast of Alabama, and [was] followed by torrential rains over a large part of the state and into Tennessee and the Carolinas. A second tropical cyclone passed over Charleston, S.C. during the morning of July 14th causing some local damage and, moving northwestward, expended its full force on the watersheds in western North Carolina where the rain from the first storm had already saturated the soil and filled the stream banks full. All previous records of rainfall in the United States were exceeded. The run-off from the saturated soil was very rapid, streams rose high above all previous flood records; resulting in the death of about 80 persons and in property damage estimated by the United States Weather Bureau at about 22 million dollars.”

Details of fatalities and property damage slowly made their way out of isolated communities. In Marshall, 53 houses were reported washed away in the narrow valley where the town lies. There, five hundred excursionists from Knoxville found themselves marooned with only one railway bridge left standing in the entire county. The National Weather Bureau recorded 22.22 inches of rainfall in one day at Altapass near Grandfather Mountain. At the time it was the greatest 24-hour precipitation total ever recorded in the United States. Enormous volumes of water fell over an area of hundreds of square miles and subsequently rushed down the mountain sides and into the rivers, carrying destruction in its path. 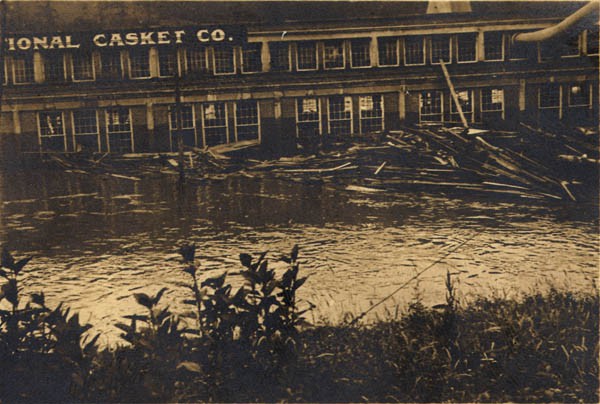 The floods of 1940 were just as devastating. The severity of a flooding event is determined by a combination of four components: the river basin terrain, local thunderstorm movement, past soil moisture conditions, and the degree of vegetative clearing. During the mid- 20th century, increased development within the river basins of many western North Carolina counties, including Wilkes, Watauga, Haywood, and Jackson, left many communities particularly vulnerable to flash floods. Tragically, the late summer rains of 1940 were stronger than average. In one 24-hour period, a record rainfall of 8.7 inches fell in Jackson County along the Tuckasegee River.

Near Boone, the ground was saturated from days of wet weather and could no longer absorb the rapidly falling rain. Water cascaded down the mountainsides, swelling streams and rivers. Close by at Shulls Mills, a train (Old Number 9) waded through 2 feet of water and passed Grandfather Mountain where it looked like the entire mountainside was a giant waterfall. As the train began the climb up into Cranberry Gap, the crew was flagged down and told they were heading into a washout. They reversed direction and began backing toward the Cranberry community. Here they discovered the culvert behind them had failed and another washout had occurred. Consequently, Old Number 9’s final journey ended on a hill between Cranberry and the Gap. Since that day, Boone has never enjoyed regular scheduled train service.

Albert McCall and his two children drowned after a tremendous slide hit their house and swept it away. The force of the slide “carried Mrs. McCall across the raging creek where she caught the top of a tree and saved herself.” The body of the McCalls’ 5-year-old son was swept nearly 60 miles by the flood waters and was found on an island near Bryson City. The bodies of Albert McCall and the other child were never found. 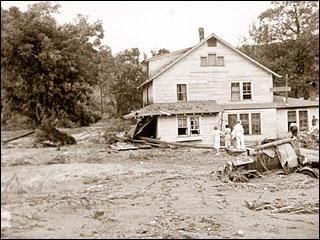 The fourth Canada resident to perish in the flood was Mrs. Vessie Mathis. Her husband told of a slide and huge quantities of water coming down Pistol Creek and carrying his home away. Mathis said “he held onto his wife as long as he could, then grabbed something solid and pulled himself from the waters.” His wife’s body was found the next morning. It was pitiful. Their house was gone. But just a little way from where the house had been their “pie safe” was standing upright, just like someone had set there. All the food still looked good. The pickled beans they’d had for supper were right there and so was the cake she’d baked,” Burrell said. “There was even a ten-dollar bill in one of the tea cups. That was to pay the granny woman when their baby came.”

The floods of 1916 and 1940 left in their wake shattered lives and unimaginable devastation. The memories, though not pleasant, have endured for many generations and have become a permanent part of our mountain heritage.

This essay was based on information provided by The Sylva Herald, Slim Rail’s Curtis Brookshire, the USGS, Wilkes Community College, Western Carolina University, and the WNC Heritage Project.