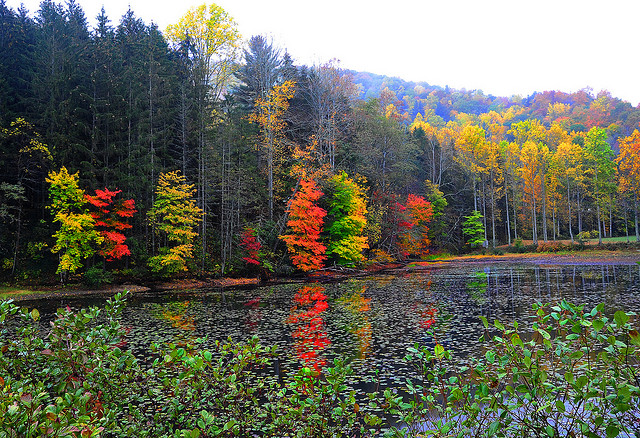 This essay was based on information provided by The Episcopal Diocese of Western North Carolina and Haywood County.

Thousands of years before the arrival of European settlers, Native Americans, particularly the Cherokees, inhabited the mountain region now known as Appalachia. Within the boundaries of present-day Haywood County, the Cherokee were scattered throughout several villages. One, called Ka-nu-ga, was located on the Pigeon River between modern-day Canton and what is now Lake Logan. The natives were the first to recognize the and appreciate the natural resources of the Pigeon River valley. 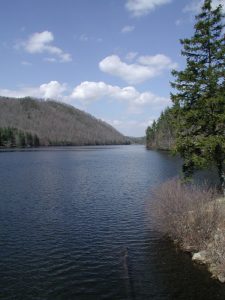 The east and west branches of the Pigeon River flow northward from their origins about twenty-five miles southwest of Asheville. The two forks merge and form a shallow near Bethel. By 1800, a busy, travel-path was in use at this natural river-crossing. The first structure at the crossing was the original meeting place of Locust Creek Baptist Church, which dates its founding to 1803. A post office soon followed. The builders of the Western Turnpike out of Asheville chose this convenient Pigeon River crossing as they pushed it westward. By 1870, a weekly stage passengers and mail over this route to Murphy in the far corner of the state. Several years later, when the railroad chose the same route, the impact was immediate. A small town formed as stores, hotels, and boarding houses were constructed. Over the years, the crossing had been referred to as Pigeon Ford, Pigeon River, and Ford of the Pigeon. In the late 1800s, the local residents of the area ordered a wrought-iron bridge from a manufacturer in Canton, Ohio. The highly visible nameplate on the bridge soon became synonymous with the crossing, and in 1893 the town officially adopted “Canton” as its name.

In 1893, Peter J. Thompson of Cincinnati had recently incorporated his new company, Champion Coated Paper Company. While visiting his son at the recently-organized Asheville City School for Boys, he noticed the region’s abundance of the two natural resources required to manufacture paper, timber and water. With little hesitation, he bought sufficient acreage on the headwaters of the Pigeon River to open a new plant, the Champion Fibre Company of Canton. A logging community called Sunburst was constructed twenty miles from the plant. It provided vast amounts of pulpwood for the growing plant. For a generation, the residents of the “planned community” of Sunburst enjoyed village life. At times there were as many as 1,500 residents. There were also about 100 black workers and, according to custom and law, two schools: one white and one black. Additionally, the first school of forestry in the United States was opened in 1910 at Sunburst. No longer in existence, it was founded by Carl A. Schenck and was known as the Biltmore Forest School.

By 1932, with its growth requiring an uninterrupted flow of water, Champion decided to dam the West Fork of the Pigeon River. The result was the creation of an 87-acre lake that completely flooded the logging community of Sunburst. Named for Logan Thompson, the son of Champion’s founder, Lake Logan rapidly became not just an industrial site, but also a place of unparalleled beauty. Recognizing this, Champion built various meeting, sleeping, and eating facilities around the lake to accommodate company functions, training seminars, and various special guests. The buildings were constructed from the logs of disassembled cabins from Jackson, Macon, and Madison counties. Many of the buildings are still in use today and are potentially eligible for listing on the National Register of Historic Places.

This corporate retreat quickly gained national acclaim. The Lake Logan Hunting & Fishing Club was incorporated soon after the dam was completed. The Club advertised “hunting and fishing privileges on 35,000 acres of forest land with perhaps 35 miles of good fishing streams, which have been stocked with millions of trout. Also deer and bear are plentiful in the forest.” A small airport was constructed. Lake Logan remained one of the premier destination resorts in Western North Carolina for many years. Among its noted visitors were the Reverend Billy Graham and President Richard Nixon. In 1986, Vice President George Bush was photographed at the Lake Logan boathouse holding his catch of native trout. 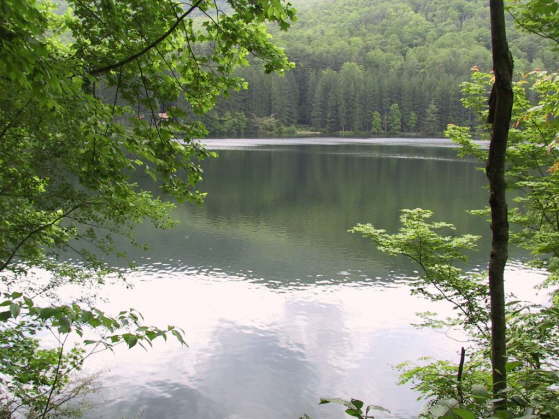 In the 1990s, Champion announced its intention to sell its Haywood County holdings. The employees of the Canton plant joined together to purchase the mill from their long-term employer. State and community campaigns to “Save Lake Logan” were organized to prevent the area from being divided and privately developed. Governor Jim Hunt and Senators Jesse Helms and John Edwards joined in the effort. Eventually, the money to purchase the property came from a variety of concerned sources: state and national groups, philanthropists, and the Episcopal Diocese of Western North Carolina. Today, the Episcopal Church operates a 300-acre retreat in the facilities constructed over 75 years ago by Champion. An adjacent 4,500 acres are preserved for recreational use, conservation, and environmental study.

Today, Lake Logan’s vibrant presence is a reminder of its rich history and tradition. It has been a symbol of pride and appreciation for many generations of mountain residents and is a true gem within the treasure of our Appalachian Heritage. 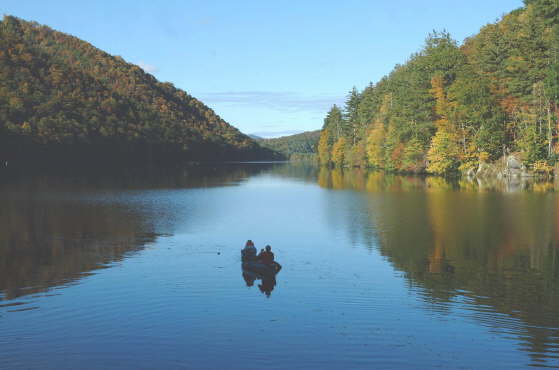 “Past, Present, Future: How the Lake Logan Episcopal Center Came To Be.”  This publication provides a detailed history of Lake Logan along with interesting regional folklore.