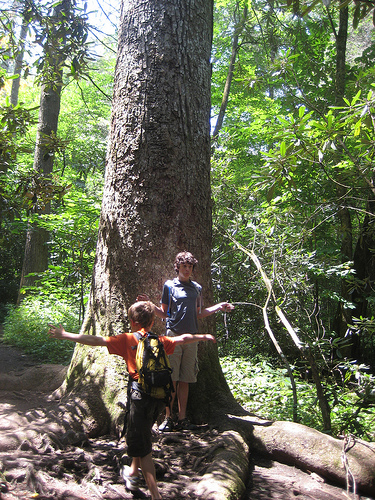 Old-Growth forests conjures up visions of the great forests that once covered most of eastern north America, and of towering trees undisturbed by logging and human settlement. They provide a vital link to our environmental past and are the preferred and sometime only habitat of a number of species. The U.S. Forest Service has identified Old Growth as an important resource to be preserved and has strong public support. On-going field studies have revealed more than four times the acreage thought to exist, about 400,000 acres. Still only about 5% of America’s original old-growth has survived and continues to be at risk from commercial logging. Joyce Kilmer Memorial Forest of Western North Carolina is the most famous and accessible remnant of this great natural treasure.

Linville Falls is home to stands of old growth forest including the Hemlock Grove along Erwin’s View trail. Two species of hemlock are common to the area: the Eastern or Canadian Hemlock (Tsuga canadensis) which is found throughout the Eastern United States, and the Carolina Hemlock (Tsuga caroliana), which is found only in a few counties along the Blue Ridge Parkway. Both of these species are threatened by the Hemlock Woolly Adelgid, an insect native to Asia. The adelgid has destroyed trees in Virginia and other parts of North Carolina.