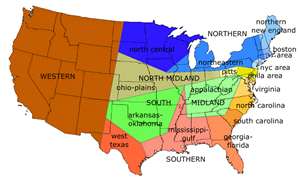 Dialect Map of the US, Creative Commons image from globalarchitectsguide.com

Languages are spoken in a variety of dialects. Appalachian English is the name given to the dialect spoken in the Southern Mountains. It differs from Standard English, the version taught in schools and spoken by network television announcers, in several ways. Some Appalachian English words are pronounced differently–fire comes out “far.” Other words have different meanings–“poke” means paper bag, “toboggan” means knit hat, and “cackleberry” means egg. Some verbs begin with the letter “a”, such as “a-going” and “a-running.” And “you-uns” and “we-uns” are used to address a group of people. This colorful dialect is considered by many to be uneducated, but it is in fact the remains of 18th-century English and Irish speech patterns that still survive in Appalachia.