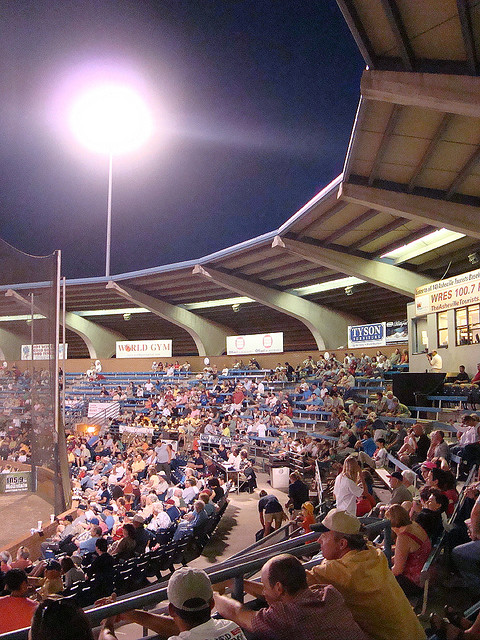 What do the GreenJackets, the RiverDogs, the Grasshoppers, the Catfish, the SandGnats, the BlueClaws, and the Crawdads have in common? They do not refer to square dance teams or high school debate clubs. Rather these intimidating monikers belong to professional, minor-league baseball teams. All currently play in the Class A South Atlantic League (SAL). Affectionately called the “Sally League,” it has been thrilling fans since its birth in 1904. Located in the heart of the mountains is one of the Sally’s oldest and most popular teams, the Asheville Tourists.

have been associated with the League for almost 100 years. Before their “Tourists” designation, the team went through several names, attempting to find the one that would represent their heritage while also instilling a degree of competitive apprehension in their opponents. Organized as the Asheville Moonshiners in 1897, they soon became the RedBirds, then the Mountaineers, before adopting in 1915 the comfortable, appropriate “Tourists” nickname. The choice came as little surprise. Even then the region was famous across the country for its beauty and attracted thousands of visitors every year. Over its long history, the team has been affiliated with several farm systems; it currently develops future major leaguers for the Colorado Rockies.

The Tourist their home games in one of the most famous and historic minor-league ballparks in the nation, McCormick Field. Opened in 1924, it has weathered both physically and culturally many seasons of change. Its location, nestled at the foot of Town Mountain in downtown Asheville, is unique if not picturesque. The climate at McCormick Field adds to its appeal. Hot summer days give way to comfortable evenings. Soon after its construction, McCormick became a stop for professional teams like the New York Yankees. The exhausted teams, north after their summer spring-training sessions in Florida, would often linger in Asheville for several days, playing exhibition games and enjoying the mountains.

One memorable visit occurred in 1926 when Babe Ruth visited McCormick Field. It is reported that he “stood in the outfield, smelled the honeysuckle and said, ‘My, my, what a beautiful place to play. Delightful. Damned delightful place!’” Another interesting saga in the history of the Asheville Tourists came several years later. The Yankees, including Ruth and Lou Gehrig, were in town for another exhibition tour. Ruth came down with a stomach ailment that confined him to his hotel room. The team eventually placed him on a train bound for New York. His absence and subsequent disappearance stirred the mills. Soon, the greatly-exaggerated report of his “tragic death in Asheville” hit the media. Though quickly corrected, the hullabaloo became known as “The Bellyache Heard ‘Round the World.”

McCormick Field has also hosted baseball legend Jackie Robinson and his Brooklyn Dodgers, accommodated stock car racing in the 1950s, and, in 1988, was transformed into a cinematic backdrop for of the greatest baseball movies of all time, Bull Durham. The Tourists regularly sell out the intimate, 4000-capacity stadium. Regular fans insist “there is not a bad seat in the house.” In fact, the team is so popular that, when McCormick was being considered for demolition and replacement in the late 1980s, public outcry and sentiment came to its rescue. Instead, an extensive remodel was planned and completed in 1992.

Reportedly, baseball arrived in Asheville around 1866 with soldiers returning from the Civil War. As a result, the region’s baseball heritage is as long as it is rich. Accordingly, whether you live five, fifty, or five hundred miles away, make it a point to visit Asheville during the summer baseball season. Upon arrival follow the signs or ask any local citizen directions to the ballpark. Purchase your tickets, stop at the concessions for a drink & a , and settle into a seat along the first base line. Enjoy the sound of the game, the smells of the fare, and the magical climate. You are experiencing firsthand an important part of our Mountain Heritage; an Asheville Tourists baseball game at McCormick Field.