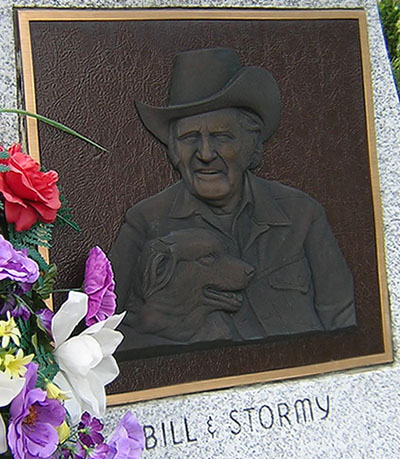 When people are asked to name words that they associate with the Appalachian region, one of the first words off the tongue is bluegrass. The country credits one man, Bill Monroe, with the creation of bluegrass. Bill Monroe had been influenced by music from a very early age. A few years after his birth on September 13, 1911, William “Bill” Smith Monroe began learning how to sing shape notes from hymnals used in the singing schools he attended.[1]  He was also influenced by his Uncle Pen Vandiver and his fiddle music.[2]  His music career kicked off with the help of his brothers Charlie and Birch when they formed their group simply titled “The Monroe Brothers”. The brothers played at many different radio stations around the country including the WLS National Barn Dance in Chicago.[3]  The Monroe Brothers mainly played an old-time mountain style of music.

Rumors began flying that The Monroe Brothers were splitting up and in 1938, the group did. Accusations were spread including the rumor that Charlie Monroe had been having an affair with Bill’s wife Carolyn. According to the story, Bill found out and pulled a knife on his brother. This particular rumor was proved to be false. The true reason of why the group broke up is the ultimatum that Charlie Monroe gave to Bill. He told Bill that he was going to the car and if he was not there in ten minutes he was pulling out and leaving. Bill stayed and Charlie left. Bill was left alone, but he was preparing for his next venture in music.[4]

After getting a band together, which he named the “Blue Grass Boys” to identify with his home state of Kentucky, Bill decided to go and try out for a spot on the Grand Ole Opry in Nashville, Tennessee. He told a band member to go and “‘tell the other boys to get their toothbrushes ready, we’re going to Nashville.'”[5] Bill Monroe and the “Blue Grass Boys” debuted on the Grand Ole Opry in October of 1939 and received the first encore in Opry history. They were also the first group to wear ties and white shirts instead of “hillbilly” attire (Bill did not like the term “hillbilly music” and refused to dress like hillbillies because of the stereotypes).[6]

The new style of music he wanted to create differed from the old-time mountain sound. The old-time sound only focused upon the fiddle and banjo, while Bill’s style allowed focus upon each individual instrument. Bill Monroe also began to use what people today refer to as the “high lonesome” style of singing lead vocals. Later in Bill’s career, a banjo player named Earl Scruggs from North Carolina, would change the way the banjo was played. Scruggs developed a three-finger picking style to be used in bluegrass rather than the clawhammer style used by old-time musicians.

Throughout Bill’s career of playing bluegrass music (as it began to be called because of the stylistic difference between Bill’s music and old time), he made sure to enjoy himself and be a helping hand. Bill made a point of taking care of band members if they were sick like he would his own children. He would also play baseball with local teams while he visited their town for a show. Comedy was also a large part of the stage routine every night.[7]

Bill began recording with Columbia in 1945 and recorded such hits as “Footprints in the Snow,” and “Kentucky Waltz” with this label. Soon after, Bill Monroe and the “Blue Grass Boys” found themselves on NBC’s televised portion of the Grand Ole Opry. The band was gaining national fame. After Lester Flatt and Earl Scruggs left his band and formed Flatt and Scruggs, the popularity of Bill himself began to decline, but the nation still liked the bluegrass sound. In 1950, Bill Monroe began recording for the label Decca.[8]

In the 1960s, Bill Monroe and the “Blue Grass Boys” became a part of the folk revival. The band played Carnegie Hall in 1961 as part of a large show hosted by the Grand Ole Opry to draw large amounts of country fans into one venue in response to the large gatherings that rock bands were attracting. In 1962, Bill Monroe and his band were playing in Sunset Park, California, and he was approached by a man named Ralph Rinzler who proved to be just the man needed to help get Bill Monroe’s career back on its feet. Rinzler made multiple bookings for Bill at folk festivals.[9]

Bill’s career took many twists and turns through the next several decades. He remained an influence to many musicians. Some of the musicians today that Bill influenced include Ricky Skaggs, Mac Wiseman, Del McCoury, and Bobby Hicks. Then in early 1996, his health took a turn for the worse. He passed away on September 9, 1996, in Springfield, Tennessee.[10] The sadness of his death was felt all over the country. His funeral was an hour long and was held at the Ryman Auditorium in Nashville.[11]  Although death came to the man Bill Monroe, his music still lives on in the minds, televisions, fields, stereos, and hearts of bluegrass fans all over the world.