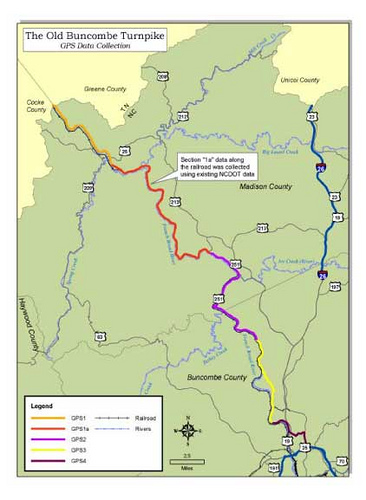 To truly appreciate the value and impact of western North Carolina’s historic Buncombe Turnpike it is useful to have a basic geographic understanding of the region it served.

Today’s Buncombe County looks much different than it did over two hundred years ago when it was incorporated in 1792.  It originally included a vast territory that now comprises twelve western North Carolina counties, being so large it was often referred to as the “State of Buncombe.”  It was isolated from surrounding population centers by its mountainous topography.  Roads were few and its rivers flowed westward, creating challenges as residents sought to engage the emerging commodity markets to the east and south.  Eventually, as other western Carolina counties were separating from Buncombe, a centrally-located, well-drained, relatively-flat plateau threaded by the Swannanoa and French Broad Rivers was chosen as the Buncombe County seat of government.  Formally named in 1797 in honor of Governor Samuel Ash, Asheville soon became both the region’s population and commercial center.  However, still 100 years before the completion of the Western North Carolina Railroad, Asheville, Buncombe County, and the surrounding communities continued to suffer the effects of geographic isolation.  It became apparent the immediate remedy would take the form of an enhanced roadway system.

Initially, road construction and improvement was haphazard.  Homes and businesses were located randomly along predated Native-American trails that had been in use for centuries.  Initially, Buncombe County required its male citizens to make an annual contribution of either material or labor for the building and maintenance of roads.  Primary routes were those widened to twelve feet and secondary trails were improved within various degrees.  A third class road was defined as adequate to support a single horse and its rider.

One notable, heavily-traveled route loosely followed the French Broad River through Buncombe County.  Droves of livestock, primarily hogs, were “driven” from various points of origin to markets throughout the region – traveling as far north as Knoxville and eastern Kentucky, and as far south to Charleston.  Many parts of the route through western North Carolina were treacherous with rocky, poorly-maintained roadbeds and wide expanses of river impossible to cross without the aid of a ferry.  This throughway got its name from the herding troupes that coaxed their livestock along its winding, mountainous terrain; it was called the Drover’s Road.

Recognizing the importance of access, in 1819 North Carolina created a Board of Internal Improvements responsible for infrastructure throughout the state.  Primarily concerned with transportation, the Board incorporated The Buncombe County Turnpike Company in 1824.  Under the direction of several prominent Buncombe citizens, the Turnpike was completed in 1828.  It was seventy-five miles in length.  The Turnpike traveled from the NC/SC state line near Greenville across the Asheville plateau along the French Broad River to just north of Warm Springs where it joined the Tennessee Road.  The impact on Buncombe County and the region was immediate.

Every year, livestock drives and other forms of commercial transport brought thousands of travelers from Kentucky, Tennessee, and Virginia across the Buncombe Turnpike enabling access to eventual destinations like Charleston, Atlanta, Augusta, and Savannah.  Subsequently, it became a prosperous period for the mountain region and other neighboring communities.  Regular mail delivery became the standard rather than the exception.  Local stores could now receive shipments of the latest fashions.  Stagecoaches ran on regular schedules connecting all points south with faraway locations like Nashville and New Orleans.  Travelers began to recognize the beauty of the southern Appalachians and a fledgling tourist industry was born.  Asheville gained a reputation as a health resort, attracting summer residents seeking the therapeutic effects of the cool mountain air.  However, the greatest impact on the region was marked by the seemingly endless stream of livestock that for decades found its trek to market aided by the new Buncombe Turnpike.

After the growing seasons of spring and summer, the months of October, November, and December saw the greatest number of droves moving through Asheville.  Horses, mules, cattle, sheep, ducks, geese, and turkeys made their way down the Turnpike.  Annual estimates of hogs driven to market vary from 150,000 to 200,000.  Moving larger animals, drovers could travel up to twenty miles each day.  However, fowl and smaller livestock were less hardy and moved much slower.  After about five miles, hogs would simply “flop down and refuse to budge.”  As a result, numerous inns, public houses, and stock-stands sprung up along the Turnpike route.

Depending on definition, stands along the Buncombe Turnpike numbered between fifty and seventy-five, practically one every mile!  The standkeepers, usually local farmers, were indispensable and many became some of the most wealthy and influential members of the community.  Each stand could accommodate several droves and up to 20,000 animals per night.  Feed and shelter was provided for the livestock as well as a hearty meal and rest for the drovers, who often left a hog or sheep behind for payment or arranged credit until the return trip after the animals had been sold at market.

The names of many of the standowners have become synonymous with various Buncombe County locations.  Examples include James Mitchell Alexander (Alexander), Hezekiah Barnard (Barnardsville), Samuel Chunn (Chunn’s Cove), and Zachariah Candler (Candler).  Alexander’s Stand, ten miles north of Asheville, maintained not only accommodations for man and livestock, but also a blacksmith shop, a tanyard, a wagon factory, a grist mill, a sawmill, a ferry, and a bridge over the French Broad River.  Another stand of note was across the Buncombe County line in the Laurel Community of Madison County.  Operated by a man named Allan, it was known as Allan’s Old Stand.  On that site in 1897, Francis Louise Goodrich established a craft cooperative that took the name of the drover’s inn.  It eventually became Allanstand Cottage Industries, a part of today’s Southern Highland Craft Guild.

The largest stand along the Turnpike was positioned alongside the French Broad River, just west of downtown Asheville, and operated by James Smith.  Smith also owned the main ferry across the river.  In 1834, he replaced the ferry with a wooden toll bridge.  For many years, Smith collected tolls on the only bridge to cross the French Broad with immediate proximity to Asheville.  Buncombe County eventually purchased the bridge and replaced it with one made if iron in 1881.  The third bridge on the same site today serves thousands of motorists as they cross the French Broad just south of the Interstate-26 Smoky Mountain Parkway Bridge.  Smith continued to build his wealth beyond Appalachia and constructed a brick mansion, Asheville’s now famous Smith-McDowell House, as a second home.

James Smith, like many of his contemporaries, recognized the benefits the Buncombe Turnpike provided for the extended region and the opportunities it offered immediate residents.  However, the Turnpike, like most innovations moved from revolutionary to invaluable to obsolete over the course of several generations.  Soon it too would become but a part of the local folklore.

Long before the railroad in the late 19th century, radio and television, the multi-lane highways of the 20th century, and the World Wide Web, the Buncombe Turnpike served as the economic and cultural link between the mountains of western North Carolina and the outside world.  The Turnpike enabled residents of the region to step from an isolated, agrarian existence into one characterized by trade, communication, and mobility.  Its construction, benefits, and subsequent impact certainly represent one of the most pivotal periods in Appalachian history.  The Buncombe Turnpike is, without a doubt, one of the most important symbols of our centuries-old, mountain heritage.