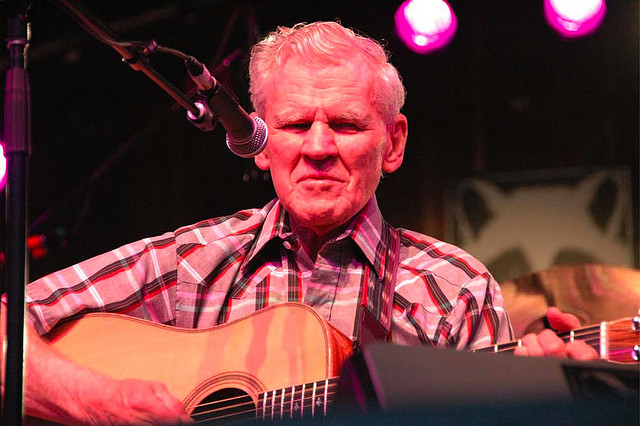 Creative Commons Image Obtained Through FlickrArthel Lane “Doc” Watson is a living legend.  Born in Deep Gap, North Carolina, in 1923, into a family with a rich musical tradition, Young Arthel lost his vision to an eye infection prior to his first birthday. He learned ballads and sacred songs from his mother and from the radio. He played music at home and with until the 1950’s when he joined a western swing band, playing electric guitar.  In the early phase of a national folk music revival in the 1960s, “Doc’s” genius as a traditional musician was discovered. He became one of the most popular performers on the folk circuit.  His many Grammy Awards and his recognition as a premier American artist are to his impact on the nation’s musical culture.

It is understood when you reach a marked degree of fame that you give up your rights to any amount of privacy – that your “personal life” in essence belongs to the world.  That characteristic is certainly true of folk musician and singer, Doc Watson.  However, for many years before this timeless artist emerged into the national spotlight he belonged primarily to his beloved native homeland which were the hills of southern Appalachia – a natural and fitting starting point from which to explore the roots and life of such a unique musical treasure.

Regionally, the Watson name dates back to the late 18th century when a Scots pioneer named Tom Watson homesteaded over 3000 acres in North Carolina.  Over time, many of Watson’s descendants migrated west into a remote, upper corner of North Carolina bordering modern-day Tennessee and Virginia.  During that period, traditional folk music was one of the threads that linked together families, neighbors, and entire communities.  The isolation of the mountainous terrain created a fertile cultural seedbed responsible for producing and preserving a rich repository of original song and lore.  It was in this setting in 1923 that Tom Watson’s most famous descendent, Arthel Lane Watson was born.

The sixth of nine children, Arthel grew up in an environment focused on family, church, and music.  Watson biographer Dan Miller writes,

“In the evenings the family read from the Bible and sung hymns from the Christian Harmony, a shape-note book published in 1866.  Arthel’s father, a farmer and laborer, led the singing at the local Baptist church.  Arthel has said that his earliest memories of music reach back to his days as a young child being held in his mother’s arms at the Mt. Patron Church and listening to the harmony and shape-note singing.”

As a boy, Arthel attempted to play anything that would make a sound.  Beginning with a harmonica, Arthel soon taught himself to pick tunes on a homemade fretless banjo.  He loved to learn songs sung by the Carter Family and Jimmie Rodgers, songs he first heard played on a wind-up Victrola owned by his parents.  Later, while attending school in Raleigh, two things happened to Arthel: (1) He began to study various forms of music such as big band, jazz, rock, and swing and (2) He fell in love with the guitar.

After leaving school, Arthel returned to his Appalachian home.  Armed with a new $12 Stella guitar, he spent his nights playing both traditional tunes and recent recordings at small community-sponsored events.  He also joined a band that had a regular radio program on a station in Lenoir, NC.  During one show, an announcer referred to the young guitarist as “Doc” – and the name stuck.  Doc especially enjoyed making music with fiddler Gaither Carlton, a man who eventually became his father-in-law when Rosa Lee Carlton married Doc in 1947.

In 1953, Doc joined Jack Williams in a band that played western swing and  rockabilly music with Doc featured on electric guitar.  It was here that Doc began picking out square dance numbers on his guitar, perfecting the “flat-picking” style that would eventually become his trademark.  Working with Williams, Doc performed a variety of music styles, from country to rock to pop – while working as a piano tuner to pay the bills.  After eight years, he joined the Clarence Ashley String Band and appeared with the group in a Friends of Old-Time Music concert in New York.  At the concert, Doc’s performance was such a success he was invited to play at Gerde’s Folk City in Greenwich Village.  These gigs in New York were indication the folk revival of the early 1960s was beginning to gain momentum.  In 1961, Doc made his recording debut with Clarence Ashley’s band.  Also about that time, at age 38, Doc switched from electric to acoustic guitar.  Two years later, he stole the show with his performance at the Newport Folk Festival and later that year he played alongside Bill Monroe at New York’s Town Hall.  In 1964, he released his first solo album, Doc Watson & Family, and began touring with his son Eddie Merle Watson (named for Eddy Arnold and Merle Travis).

The folk boom lasted most of the decade before fading in the late 1960s.  However, Doc retained a legion of loyal fans and, upon being featured on the Nitty Gritty Dirt Band’s Will The Circle Be Unbroken in 1972, gained a whole new generation of admirers.  In 1974, he won the Grammy for Best Traditional Recording and the following year, he and Merle took home the same award for their duet Two Days in November.  The bond between father and son continued to grow.  Merle, like Doc, was raised in the high mountains of northwest North Carolina like his father, and there was taught to treasure home, family, and music.  Throughout the 1970s and early 1980s, Doc and Merle expanded their audience nationwide, often spending up to three hundred nights a year on the road.  Merle acted as bus driver, manager, and fellow musician for his father, as well as providing companionship and support.  Sadly, in 1985, tragedy struck.  Merle was killed in a tractor accident on the family farm.

Losing both his son and partner, Doc found it difficult to continue playing music remarking, “the best friend I ever had in the world.”  In a 1997 interview for Acoustic Magazine, Doc remembers,

“The night before the funeral I had decided to quit, just give up playing.  Well that night I had this dream. … in this dream it was so dark I could hardly stand it.  It was like I was in quicksand up to my waist and I felt I wasn’t gonna make it out alive.  Then suddenly this big old strong hand reached back and grabbed me by the hand and I heard this voice saying, ‘Come on dad, you can make it. Keep going.’  Then I woke up. I think the good Lord was telling me it was all right to continue with my music.  It’s been a struggle, but I still have the love for the music.”

Soon Doc was back on the road, playing his unique sound for sold-out audiences and performing alongside many of the best musicians available.  In 1988, Doc hosted the first annual Merle Watson Memorial Festival, soon to be labeled Merlefest.  Performers staged on the back of two flatbed trucks played to a crowd of about 4,000.  Since then, Merlefest has become one of the largest traditional music events in the nation.  Today’s festival lasts four days and is attended by close to 45,000 people including a wide range of musical styles together with folk, country, bluegrass, blues, Cajun, Celtic, old-time, gospel, and acoustic jazz.

Since the early 1960s, Doc Watson has recorded over one hundred albums, many solo, many were with Merle, and others with various artists.  Favorites include Will the Circle be Unbroken Vol. I & II (1972), Pickin’ the Blues (1985, with Merle), My Dear Old Southern Home (1991), and Songs from the Southern Mountains (1994).  There is also a fabulous 4-CD set, The Vanguard Years (1995), that features 1960s performances from two Newport Folk Festivals and other tracks recorded when Doc was with the Vanguard label.  These recommendations will provide a little something for everyone to enjoy as well as a great sampling of Doc’s best works.

Today, well into his 80s, Doc does not tour as much as before.  However, he continues to perform regularly throughout southern Appalachia.  Recognized for his charm and comfortable wit, Doc remarks in a familiar drawl, “I’m like an old dog, I hate to be run off from home.”  Doc also continues to achieve recognition after recognition for his music; he seems to get better with age.  In addition to five Grammys, he has been awarded a National Heritage Fellowship, received a National Medal of the Arts, and in 2004, was presented the Lifetime Achievement Award by the National Academy of Recording Arts & Sciences

Doc is truly an American original.  For almost fifty years, his simple and straightforward style has influenced popular trends while also preserving the spirit of old-time traditional music.  His vast contributions to our regional and national culture are without a doubt, genuine, unique, and lasting.

Oh – by the way, Doc Watson lost his eyesight before his first birthday and has been blind now for over 80 years.  Nonetheless, this “minor inconvenience” obviously has done nothing to lessen the accomplishments, or dim the proud light that glows so brightly within the soul of this cherished symbol of our southern Appalachian heritage.