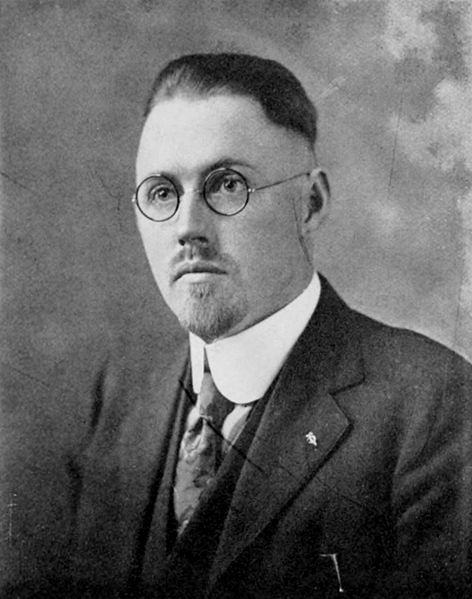 John Brinkley of Jackson County, North Carolina, made his fortune implanting goat glands into men who today would turn to Viagra. When both his Kansas medical and his radio station licenses were revoked in 1930, he retaliated by running unsuccessfully three times for governor of Kansas (in 1930, 1932, and 1934) and by building a new radio station. XERA—with studios in Texas but its transmitter across the border in Mexico—eventually broadcast with 500,000 watts of power in defiance of US regulations. Blanketing much of the United States, XERA made many country music performers famous. Brinkley died in 1942. You can see his house and the memorial he erected to his Aunt Sally who raised him on NC 107 south of Cullowhee in Jackson County.

the turn of the 20th century, most areas of Appalachia remained rural and isolated.  In North Carolina, the county of Jackson fit that description.  It seemed unlikely the county would produce an individual who would go down in local and national history as one of the most characters of the 1920s and 1930s.  Whether referred to as a snake-oil salesman, broadcast pioneer, controversial goat-gland doctor, or marketing genius, John R. Brinkley touched millions of lives while living a flamboyant life that both his supporters and critics found impossible to ignore – and continue to speak of today.

John Romulus Brinkley (he later changed his middle name to Richard) was born  July 8,   in the Beta community of Jackson County, North Carolina.  He was the illegitimate son of John Brinkley and Sally Burnett.  The elder Brinkley was a true “mountain doctor,” having “read” medicine, but with no formal training.  The younger Brinkley was orphaned at an early age and was raised primarily by his Aunt Sally.  He attended a one-room school in the Tuckaseegee community where he displayed and developed his sharp intellect.  However, there was little indication of what was yet to come.  After a series of jobs, Brinkley enrolled in Bennett Medical College in Chicago and ultimately finished his coursework at Eclectic Medical University in Kansas City.  Neither school was accredited; both awarded what was referred to as “$500 diplomas” implying tuition payment was the only true scholastic requirement.

While still a student, Brinkley began dabbling into what was referred to as the “wild side of medicine.”  At one point, he and one of his peers injected patients with water, claiming that it was a miraculous cure for venereal disease.  Later, after setting up practice in Milford, Kansas, Brinkley discovered what would become the foundation block of his fame, fortune, and eventual scorn.  In 1918, a local farmer, suffering from failing virility, asked the doctor to implant in him a portion of the “sex gland” of a male goat.  Brinkley obliged, the procedure was successful, and by both men’s accounts, the farmer’s life was “restored.”  Brinkley seized the moment and publicized the operation and its beneficial results.  Soon patients were lining up for the goat gland transplant.  Within months, Brinkley was performing more than one hundred “rejuvenation” operations a week for a fee of $750 each.  One account recalls how patients were required to supply their own goat.  Whether the goats made the “ultimate sacrifice” or were simply “robbed” of their ability to procreate was debated.  However, one thing is certain, on the eve of the Great Depression, Brinkley was on his way to unimaginable wealth.  Searching for a method to attract additional patients, Brinkley quickly discovered another venture that contributed to his increasing notoriety, radio.

Owning a personality which was not easily satisfied, Brinkley sought ways to expand his successes.  In 1923, he bought the fourth commercial radio station in the U.S., KKFB in Milford, Kansas.  He rapidly built it into a regional presence.  “Kansas First, Kansas Best”––”the Sunshine Station from the Heart of the Nation.”  KKFB provided weather reports for local farmers, market reports out of and gave early exposure to Western stars like Roy Rogers and Gene Autry.  KKFB was also the first station to offer college courses on the air, with lectures transmitted by telephone from what was then called Kansas State Agricultural College.  Brinkley added fundamentalist preaching and regular programs offering medical advice, and through arrangements with pharmacies in the region, began prescribing medicine over the radio.  “But, oh my friends,” he would tell his listeners, “you must help me. Remember your letters asking advice must be accompanied by two dollars …”  KKFB added to Brinkley’s fame and wealth, but his exposure and methods earned him enemies as well. 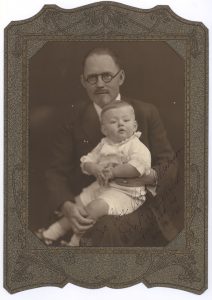 Brinkley with an unidentified child. The Photograph is inscribed “To Professor Rob’t. Madison, John R. Brinkley, Milford, KS, May 17 – 1930.”

By the end of the 1920s, the American Medical Association was investigating the “doctor” for malpractice.  The Kansas City Star had published a series of articles accusing him of fraud and the newly formed Federal Radio Commission was looking into his broadcasting practices.  Consequently, Brinkley lost his Kansas medical license in 1929 and his radio station was forced to close in 1930.  Brinkley chose politics as a method to fight back.  He ran for governor of Kansas on a “vindication” ticket three times in the 1930s, never winning but adding to his notoriety nonetheless.  In 1930, he polled a respectable 30.6 of the vote.  However, in both 1932 and 1934, he was defeated by presidential candidate, Alf Landon.

Not to be discouraged, Brinkley moved to Del Rio, Texas and built a radio station, XERA, just across the Mexican border – out of reach of the U.S. regulators.  Licensed for 300,000 watts by the Mexican government, XERA often turned up its power to 500,000, sometimes 1,000,000 watts ––”the world’s most powerful broadcasting station”, sending a signal across the U.S. into Canada, and occasionally over the North Pole into Russia.  Several sources (some as doubtful as Brinkley’s medical claims) report the Russians used XERA to teach English to their spies.   XERA’s contributions to early country music were significant.  Notably, the Carter Family performed for three years on “Texas Radio” rocketing them to national fame.  Waylon Jennings, growing up in Littlefield, Texas, remembered when his father used to pull the truck up beside the house and run a cable from the battery to the radio so he could listen to the Carter Family on XERA.  Johnny Cash also remembered hearing the Carter Family (including 10-year-old June, whom he would marry some three decades later) on the border radio broadcasts.  Radio shows such as the Grand Ole Opry on WSM Nashville, the National Barn Dance on WLS Chicago, and the Wheeling Jamboree on WWVA Wheeling, West Virginia, popularized “hillbilly music” during the early days, but it was XERA and other “X” stations along the Mexican border that gave the musical style national exposure.  Of course, there was also an economic component as well.  Audiences heard on-air pitchmen selling everything from Crazy Water Crystals to baby chicks to tomato plants to Last Supper tablecloths to autographed pictures of Jesus.

On one visit back to his native Jackson County in the 1930s, Brinkley invited local musician Aunt Samantha Bumgarner to pack up her banjo and accompany him back to Texas.  Bumgarner would go only if her friend, fiddler Harry Cagle could go as well.  Brinkley agreed.  Harry, who later formed Harry Cagle and the Country Cousins, recalls “riding out west in Brinkley’s big Cadillac with gold hubcaps with the letter “B” on them.”  For more than three years, Bumgarner and Cagle sang and played ole- tunes on Brinkley’s radio station.  XERA was so powerful that folks back home in North Carolina could listen to their “banjo-picking ballad woman of the mountains.”

In Texas, Brinkley added to his medical fortune.  He used XERA to urge patients to visit his new clinic or buy a variety of gimmicks, including vials of water, at a price of six for $100.  Brinkley sold Peruna (“to knock out the torture of colds”) and Kolorbak (“scientifically imparts and charm to hair”).  He rarely implanted real goat glands, but substituted what he described as “commercial glandular preparations.”  He also performed numerous prostate operations and instituted the use of Mercurochrome shots and pills to help restore youthful .  It is estimated he earned $12 million between 1933 and 1938.  However, his conspicuous display of wealth–a lavish mansion, expensive cars, private planes, yachts, diamonds – got the attention of his adversaries.  As the 1930s came to a close, so did the glorious career of John Brinkley.  He lost a libel suit against the AMA which left him branded as a quack.  His Mexican radio station was closed down and he found himself being investigated by the IRS for non-payment of taxes and by the U.S. Post Office for mail fraud.

Brinkley’s final years came swiftly.  He declared bankruptcy in 1941.  The following year circulatory problems led to the amputation of one of his legs, and on May 26, 1942, he died in San Antonio of heart failure.  Buried in Memphis, Brinkley left behind three daughters by his first wife Sally Wike, whom he had married in 1908 and one son by his second wife Minnie Jones, whom he married in 1913.  He also left behind a farm in the Tuckaseegee community of Jackson County.  The name “Brinkley” is still visible to passing motorists, prominently inlaid within the stone fence facing NC 107.  Further down the road, a granite monument commissioned in the 1930s by the doctor to his Aunt Sally stands guard over the appropriately named Aunt Sally’s curve.

The life of Jackson County’s John Romulus Brinkley is the stuff of Fairy Tales and Big Fish Stories.  Not even fiction could have penned a more remarkable narrative.  Brinkley dabbled in medicine, politics, marketing, and media.  He pioneered and experimented with early radio, initiating one of the most influential periods in the development of country music.  His heritage belongs not only to his native Appalachian but to the entire 20th century American experience.