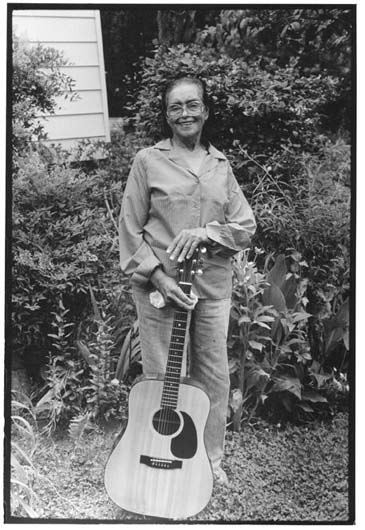 Etta Baker was an important Appalachian blues guitarist. Born in North Carolina’s Piedmont in 1913, she spent her adult life in the mountain town of Morganton. Her mixed African-American, Irish, and Native American heritage gave her important insights into many different musical styles. Her recording of the traditional tune “One-Dime Blues” was an important influence on the folk music revival of the 1950s and 1960s. It won her increasing attention as a repository of a mountain blues tradition that was disappearing. Most of her music was unreleased until 1991, when her first full album appeared. In 2004 she released an album with the renowned blues musician Taj Mahal. She was recognized as a national cultural treasure when she was awarded a National Heritage Fellowship.

Along about 1960, song-collector Paul Clayton owned a small cabin outside of Charlottesville, VA.  When friends from the “big city” visited, he often took them down into the North Carolina foothills to meet and hear Etta Baker.  In her 40s yet still relatively unknown, Baker was one of the finest Piedmont Blues guitarists in the region.  On one such occasion, Clayton’s cabin guest was down-south to celebrate his 21st birthday.  Etta Baker’s unique style of acoustic finger-picking so influenced the young musician, that it inspired him to “create” one of his best known songs.  After visiting Baker and returning to New York, Bob Dylan penned “Don’t Think Twice, It’s All Right”.

Etta Lucille Reid was born in 1913 and grew up in Morganton, NC.  Racial lines in the region were not as rigid as those in the tobacco & cotton growing regions of the south and when asked, Etta recalled a close-knit community comprised of African, Native, and European heritages.  The Reid family claimed a bit of all three.  Etta’s father, Boone Reid, was a long-time player of Piedmont Blues and began teaching Etta the guitar early in life – even before she could properly hold the instrument.  Soon Etta was proficient on the 6- and 12-string guitars and also the 5-string banjo.

As a child and a young woman, Etta often played at churches, parties, and dances with other members of her family.  She essentially gave up public performing in 1936 when she married Lee Baker.  Now Etta “Baker,” she began a busy existence of marriage, raising a family, and earning needed money working in local textile mills.  Of note, while warm and gracious, Etta was also quite striking.  This feature prompted her husband, himself a piano player, to encourage a more “grounded” life for his new wife, rather than one of the “ups, downs, and temptations” that went along with a performing schedule on-the-road.  Etta settled into a world where her future seemed predictable and without event, playing music publicly only within her close-knit circle of family & friends.

Then, fate brushed Etta Baker with a light coat of fame.  Etta’s father, Boone Reid, had never abandoned his support & love of traditional, regional music and dreams of public performances.  One summer day in 1956, Reid had taken his family to visit Cone Mansion in Blowing Rock.  Folklorist Paul Clayton, in the area collecting “undiscovered” field recordings, walked just in front of the group, his guitar resting on his shoulder.  Etta’s father suggested Clayton may enjoy his daughter’s talents and asked if she could play a tune on his guitar.  Etta’s version of One Dime Blues so delighted Clayton, that he immediately scheduled a stopover the next day at the Baker’s house – with his tape recorder ready to go.

Clayton’s recordings became the influential folk collection, Instrumental Music from the Southern Appalachians and Etta had two contributions included: One Dime Blues and Railroad Bill.  Both songs became traditional standards during the 60s folk revival movement.  This was the first time the world outside Etta’s immediate circle heard her unique finger-style guitar.  However, little changed for Etta …at first.  She returned to her home and job in the textile mill.  In 1967, her husband died and Etta remained steady for many years; dedicated to family and job.  Eventually, Etta decided to follow her lifelong love: music.  She retired from the factory to concentrate full time on playing and performing.  Then things began happening …

Etta began playing small concerts and festivals.  She quickly became recognized as one of the foremost practitioners of acoustic Piedmont guitar finger-picking.  Her musical style is characterized (and easily identified) by a “steady baseline wrapped with lilting melodies”.  Etta grew up in a region culturally represented by rural white “picking,” European fiddle tunes, and African-American blues – and her playing uniquely blended all three.

In 1989, Etta received the North Carolina Folk Heritage Award and two years later a National Endowment for the Arts’ National Heritage Fellowship.  She released her first album (at the age of 78), appropriately named “One Dime Blues.”  In the mid-1990s, Etta teamed with the Music Maker Relief Foundation – thus becoming solidly represented by a professional distributor and most notably, paid for her work.  Several additional albums were released.  Included in these recordings are banjo songs performed by her father and duets of Etta with her sister, Cora Phillips.

Etta continued to perform well into her 90s, up until her death in 2006.  What level of fame and notoriety could Etta have reached had she began performing and recording earlier?  What did we miss when Etta decided to stay home, to remain committed to her husband’s wishes, to raise nine children, to tend her garden, and to work in the Buster Brown sewing factory rather than follow her talent and dreams?  Considering the question, one biographer offers, “… Baker did not abide by regret.  She made her decisions clear and loved all sides of it.”

Etta Baker’s legacy continues to circulate and influence even today.  Her unique sound, her two-finger style, lives in the performances of Taj Mahal, Bob Dylan, and hundreds of other musicians.  Mahal is reverent.  He comments of Baker’s songs, “(It) seems like you can see right through them back to the past.”  Etta Baker’s renown has reached far.  However, listening to her music, it is clear her roots are grounded in our local culture & regional heritage.

In the song “Carolina Breakdown” on the album, “Instrumental Music of the Southern Appalachians,” listen for the finch that flew in through an open window when Paul Clayton was recording Etta in 1956.  It landed atop a door and blended its song without hesitation.

The text was written with help from the following informational sources: