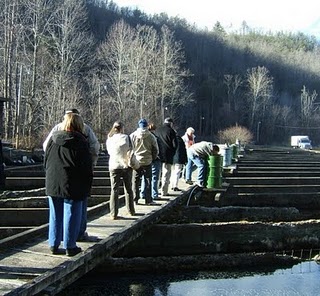 Fish farming is a rapidly growing and profitable industry nationwide as demands grows for fish and other aquatic foods. In recent decades fish farming has grown in many Appalachian states including North Carolina. Spring-fed mountain springs provide an ideal environment for production of trout, both native and non-native. These are marketed to restaurants and sold to fishermen who pay a fee to catch them in stocked ponds and streams. Catfish are another native species that thrive in a pond environment. Non-native species such as tilapia are raised in closed tank systems since their release into streams and lakes is illegal in most states. Fish farming is another way innovative mountain farmers are competing in America’s agricultural economy.