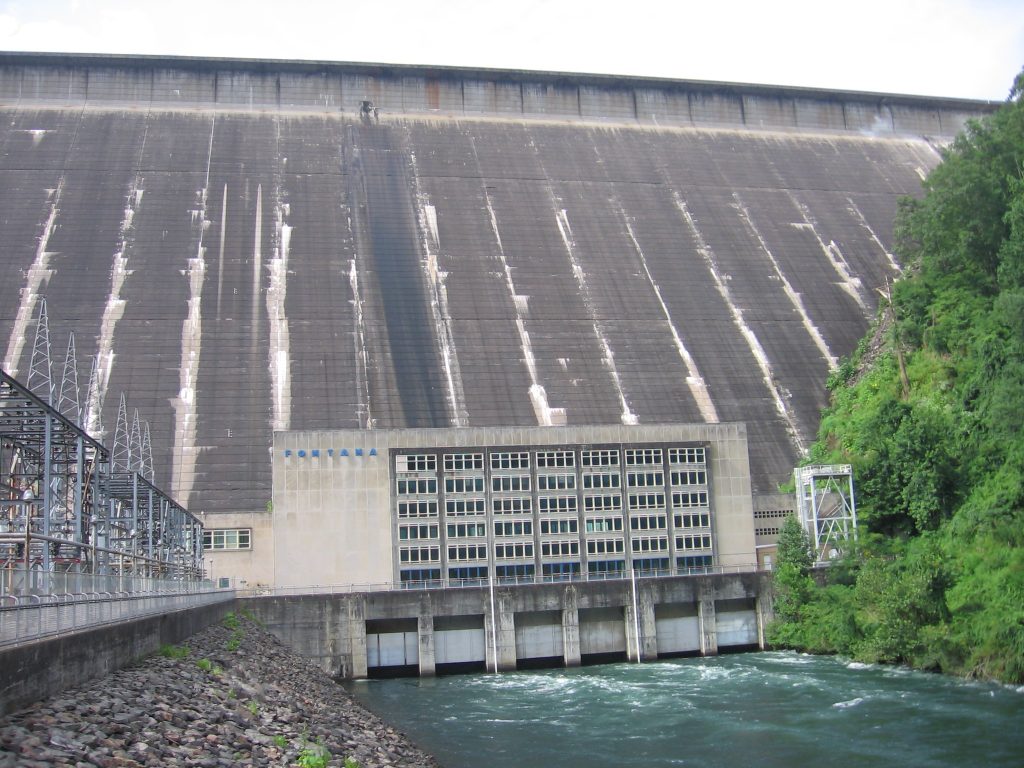 In order to develop atomic weapons during World War II, the Federal Government needed a source of energy to power the top-secret Oak Ridge National Laboratory. Out of that need the Fontana Dam, Fontana Lake, and Fontana Village were born. Located in Graham and Swain counties in western North Carolina, the region is collectively known simply as Fontana. Its history is a fascinating story mixing rural mountain heritage and the progress of modern technology. For more than fifty years, this combination has inspired both precious and painful memories for thousands of people. Breathtakingly spectacular and somewhat bittersweet, Fontana plays an important role in our Appalachian heritage.

This essay was based on information provided by Lance Holland’s book Fontana and the websites of Graham County NC, the Fontana Village resort, and WNC Attractions. 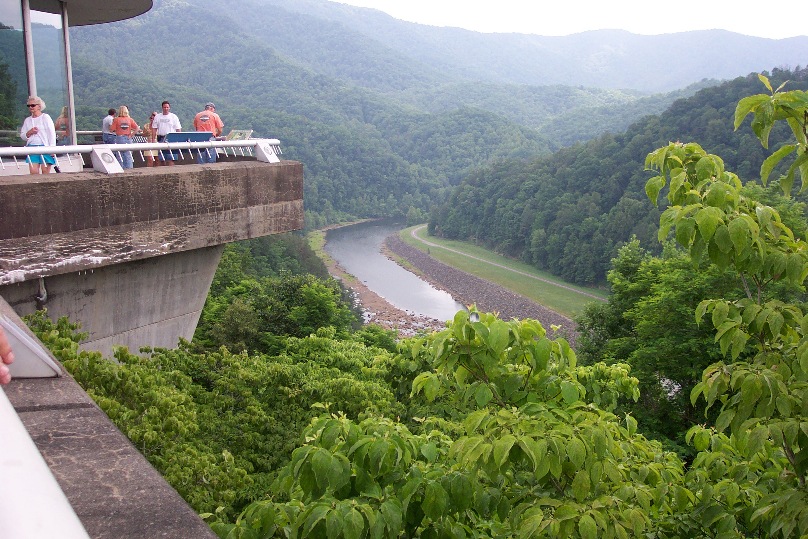 The Highest Dam East of the Rockies

Surrounded by extraordinary views of the Smoky Mountains, national forests, and deep river gorges, Fontana is one of the most beautiful dams in the world. Completed in 1944 at a cost of over $70 million, the dam is 480 feet tall and almost mile wide at its crest. The Appalachian Trail winds across the top of the dam as it makes its way from Georgia to Maine. Hikers have named the nearby trail shelter the “Fontana Hilton,” since it is one of the few stopovers with hot showers nearby. Fontana was not designed as an overflow dam, so it has a somewhat distinct appearance:  its length is accentuated by the absence of water spilling over the top. Whenever the reservoir reaches capacity, water is released downstream through spillways through the base of the dam. 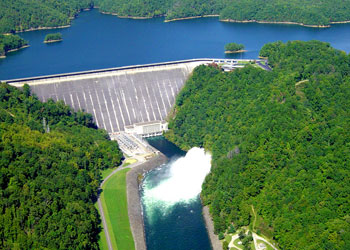 The lake created by damming the Little Tennessee River has over 240 miles of rugged shoreline and covers over 11,000 acres. Locals and visitors enjoy boating and other water sports nestled within beautiful mountains. Fontana Lake boasts some of the best pike and bass fishing anywhere. Chambers Creek and Hazel Creek are among many tributaries that feed the lake, offering fishermen an opportunity to catch rainbow and brook trout in their native streams.

Today, it is difficult to imagine Fontana Village as anything but a beautiful tourist resort. However, for several years in the 1940s, this site was actually North Carolina’s largest city west of Asheville. Because the site was located deep in the Great Smoky Mountains, a railway had to be built to transport supplies. Almost overnight, a community was established in the wilderness. Mountain residents felt both amazement and dismay as their rural environment was transformed before their eyes. Created in order to support of the dam, Fontana Village was home to over 5,000 workers and their families.  This “camp of cottages and dormitories” included: schools, churches, stores, a cafeteria, a hospital, and its own post office. (both men and women) worked three shifts, 24 hours a day, 7 days a week.  Over 6,000 meals a day were served. In one month, the cafeteria used over 30,000 pounds of beef and poultry; 7,000 pounds of fish 250,000 eggs; and 42,000 pounds of potatoes. Because of the accelerated wartime schedule, dam construction was completed in less than three years. It would have taken twice as long in peacetime. In 1945 the dam was completed, the war ended, and the workers left, but the Village remained. By 1947 the site had been developed into one of the largest and most successful resorts known at the time. Through the fifties, sixties, and seventies, thousands of visitors arrived to enjoy boating, fishing, hiking, horseback riding, and the natural scenery surrounding Fontana Village. The eighties and nineties brought a period of and upgrading. Today the resort boasts traditional cottages, timeshares, swimming pools, restaurants, meeting space, and a large inn where guests gather in front of a huge fireplace to chat and reminisce. Today’s Fontana Village offers a combination of old-fashioned and modern activities and a wide selection of accommodations.

The Road to Nowhere

The birth of Fontana was not without sacrifice and controversy. Almost 70,000 acres of land taken through the federal government’s power of eminent domain to support the project.  1,300 families were relocated– some elderly, some widows with children, and many that had never lived anywhere else. Hundreds of homesites, dozens of small communities, and more than 20 cemeteries were rendered inaccessible or flooded by the new lake. In addition to compensating displaced owners, the federal government offered a $400,000 payment to the State of North Carolina and a promise to local residents to construct a road giving them access to the cemeteries containing their loved ones. Approximately 6 miles of the promised road, including a bridge and a 1,200-foot tunnel, completed, but environmental concerns have prevented the remaining 26 miles from being finished. Referred to locally as “The Road to Nowhere,” the project has been a source of bitter controversy for decades. Cost, the environment, lost family heritage, and broken political promises characterize the debate. Many people insist that the government must build the road to their ancestral cemeteries while others want to preserve the pristine wilderness leading to the gravesites.

The beauty and appeal of Fontana lie in its unique location and topography. It is located about 60 miles southeast of Knoxville, 100 miles west of Asheville, and 175 miles north of Atlanta. Check the links below for specific directions and additional information.

directions to "the road to nowhere"

Take the Bryson City Exit # 67 off US 74, make a right at the first light, a left at the second light, and continue straight. Go several miles past Swain County High School. Look for a sign on the left that says “The Road To Nowhere.” Immediately after the sign you will enter the Great Smoky Mountains National Park. Tucked away in the Nantahala National Forest and bordering the southern edge of the Great Smoky Mountains National Park, Fontana is a national treasure. A visit for several weeks, several days, or an afternoon will provide an educational and entertaining link with history and our rich Appalachian Heritage.