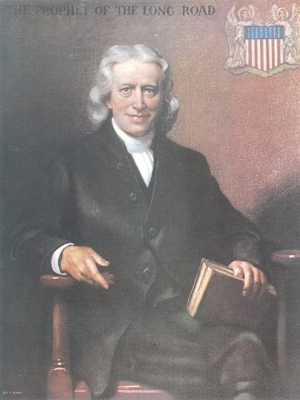 Francis Asbury was the circuit-riding founder of the Methodist Church in America. From his arrival in America in 1771, he tirelessly rode on horseback throughout the Eastern United States, concentrating on frontier communities that lacked churches. He visited western North Carolina repeatedly to create and then nurture fledgling Methodist congregations. He preached to groups gathered in cabins, boardinghouses, schools, taverns, fields, and even at public hangings. It is estimated that he rode over a quarter of a million miles and crossed the Appalachian Mountains 60 times. In 1784 he was ordained a superintendent, or bishop, in the Methodist Episcopal Church. At his death in 1816 there were some 214,000 Methodists in America, many of whom he had personally converted.