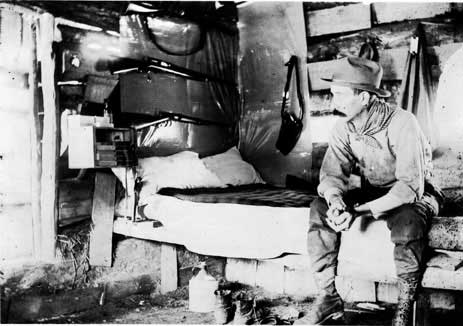 In 1934, the United States Congress officially established what is today the most popular National Park in the country, the Great Smoky Mountains National Park. As a result, over 500,000 acres of scenic forestland straddling the border between eastern Tennessee and western North Carolina was preserved for both human enjoyment and as a wilderness habitat.

In the late 19th and early 20th centuries, many individuals and organizations donated vast amounts of time, energy, and money supporting the creation of the proposed park. One of those individuals, Horace Kephart (1862-1931), lived a fascinating life. To this day, he is celebrated as a leading champion of self-reliant living and the natural environment. He is also one of the most well-known early advocates of the Great Smoky Mountains and Appalachian Heritage.

Kephart spent most of his childhood and early adulthood in the Midwest. At the age of 42, though having built a successful career in library sciences, he became personally overwhelmed by what he called “nervous exhaustion.” Convinced that his urban lifestyle was to blame, Kephart left his family and job in St. Louis. He moved to rural western North Carolina, arriving by train in Dillsboro in the summer of 1904.

Kephart eventually settled in a remote cabin situated on Hazel Creek in Swain County near Bryson City. He immediately began to absorb himself in his environment, hiking the surrounding mountains and taking notes on the abundant flora and fauna found in the Smokies. Just as important was his interest in native Appalachian culture. He spent much of his time observing the lives of his new neighbors, noting how they lived, what they ate. Kephart also shared in their joys, sorrows, challenges, and rewards.

About that time Kephart wrote, “Seldom during those years as a forest exile did I feel lonesome in the daytime, but when supper would be over and black night closed in on my hermitage, and the owls began calling all the blue devils of the woods, one needed some indoor occupation to keep in good cheer.”

Fortunately for history, Kephart found his cheer penning books, journals, and magazine articles. The results of his writings offer the outside world with an invaluable window into Appalachia. They provide historians and anthropologists with a record of a vanishing culture. His articles and books on camping, woodcraft, the natural environment, and the people of the southern Appalachians contain detailed narratives that are as useful and popular today as they were when first published.

Before his death in 1931 from an auto accident, Kephart became one of the nation’s leading advocates of a proposed national park that would help protect and preserve his adopted and beloved Smoky Mountains. Due to the efforts of Kephart and hundreds of others, the region was selected from over sixty competing sites. Subsequently, the Great Smoky Mountains National Park was officially designated in 1934.

Today 95% of the Park remains forested with with many spectacular, towering stands of virgin, old-timber growth. Nine million people visit the Park every year making it the nation’s most popular.

Though he died before the Park was officially recognized, Horace Kephart would be proud of the Appalachian heritage he helped preserve–and no doubt surprised at the legacy of his life and writings. In tribute, his name was given to one of the prominent peaks in the Smokies and a stream that arises on its slopes, a fitting honor deserved and earned by an important figure in our Appalachian heritage.

This essay was based on information provided by Hunter Library’s Department of Special Collections and Mountain Heritage Center at Western Carolina University, and the Asheville Citizen-Times.