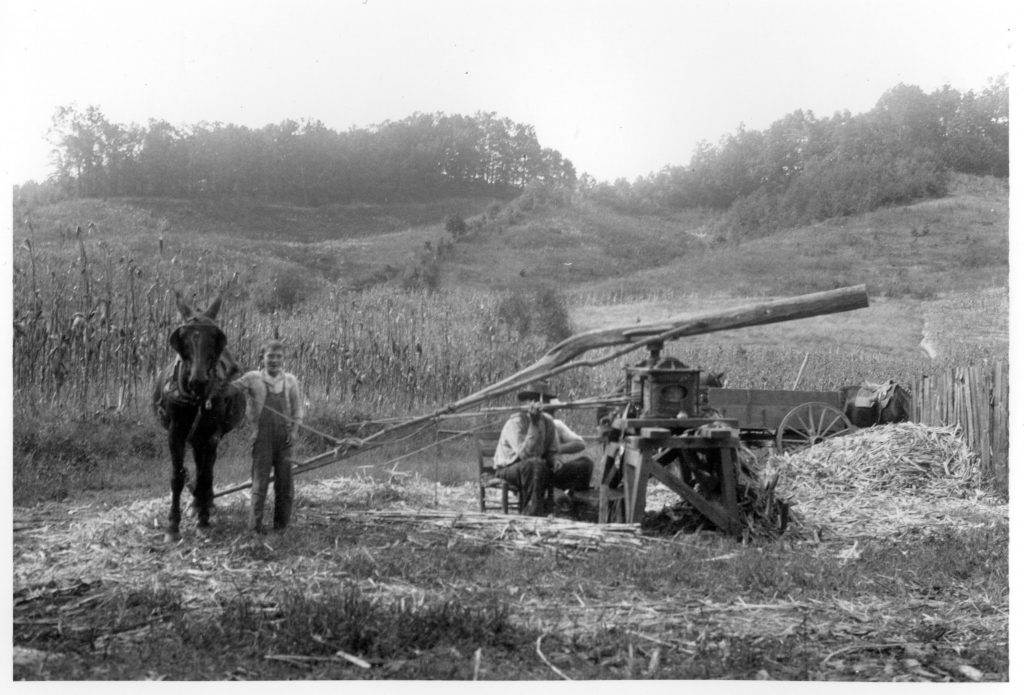 People have sweetened their food with many substances besides sugar and honey. In Appalachia, sorghum was a traditional sweetener. Technically a grass, sorghum cane grows to the size of bamboo. It was brought to Appalachia in the 19th century. The cane is cut in the fields in the fall. In the cane mill, juice is extracted by squeezing the stalks through rollers, sometimes powered by mules walking in an unending circle around the grass. As the juice is boiled down, greenish foam is skimmed off the top. When the amber-colored syrup reaches the desired consistency, it is cooled and put up in jars. Drizzled over hot biscuits and cornbread, added to baked beans, gingerbread, and barbecue sauce, this sweetener, sometimes referred to as molasses, has flavored many a mountain meal.

Sorghum, or molasses as it is sometimes called, was along with honey, a main sweetener in the mountains. Sorghum cane was brought to America from Africa in the 19th century. Most communities had a sorghum mill. Farmers brought their cane to the mill. There the 6-to-12-foot stalks were crushed between rollers powered by a mule walking in a circle. The resulting juice was boiled down in large pans to a thick, sweet syrup. It was poured over pancakes and biscuits, and used as an ingredient to flavor cakes, cookies, and candy. Some people in the mountains still prefer it as a sweetener, and a few still make it. But its consumption has now been surpassed by the granulated white sugar bought in grocery stores.

Not too many years ago if you were walking down the sidewalk in a rural Southern town, it would not be unusual for one of your friends to approach and ask, “Wanna head over to a stir-off with me tomorrow?” That strange question would not reference a social dance or a local competition. Instead, it would be an invitation to an event that, like a quilting bee, was an opportunity for rural folk to socialize while spending their time creating a traditional favorite: sorghum molasses.

In the early part of the 20th century, modern roads began to link the South with other parts of the nation. As a result, new products flooded into the region to satisfy the demands of the population. One commodity that changed the tastes and habits of Southerners was refined sugar. Low in price and convenient to use, refined cane sugar revolutionized the way folks prepared and served food – and replaced other sweeteners. However, “progress” and accessibility did not come to Appalachia as quickly as they did to other parts of the South. Consequently, traditional customs survived longer in many mountain coves and communities. As a result, a Southern delicacy, sorghum, became a wonderful example of the survival of traditional heritage shared throughout the Appalachian region. The production of sorghum is as unique as its results are delicious. So, if you are interested – let’s go to a stir-off!

Sorghum is a grass native to both China and parts of Africa that was introduced to America in the 1800s. Similar to sugar cane, sorghum cane stalks often grow taller than six feet. Years ago, neighbors would gather to help each other harvest their cane. Workers would move through each row and strip the long leaves from the stalks. Long sleeves and gloves were needed to protect arms and hands from being nicked by the sharp edges of the leaves. The stalks were then cut close to the ground and stacked in bundles. The bundles, loaded into wagons or onto sleds pulled by a horse or mule and were hauled to the sorghum mill.

At the mill, a press constructed of revolving metal canisters acted as rollers that squeezed the juice “squeezings” from the cane. The power source was usually a mule walking around in circles pulling a large pole that connected to and rotated the rollers. On one side of the press, the stalks were fed into the revolving canisters. On the other side the crushed stalks were removed. The process extracted the cane juice which flowed into buckets below the mill.

Next, the squeezings were strained into a large pan. Then they were poured into a large vat perched atop a fire. A great deal of wood was burned when making sorghum, and a large pile was stacked close by. A vat was usually about eight feet long and four feet wide and ten to twelve inches deep. It was usually constructed from sheet metal, although sometimes a copper kettle was used. A slow-burning fire that was not too hot was very important. Women and men used large wooden paddles to stir the green squeezings as it was poured into the vat. When the juice began to boil, a green, murky film formed on the surface. The paddles were used to remove this green froth. Sorghum molasses had to be constantly stirred and skimmed throughout the boiling process – thus the name “stir-off!” As it cooked, the juice became darker and thicker, and the aroma of sweet sorghum molasses would fill the air.

Experienced cookers could tell by sight when the molasses was ready. Then the vat was removed and placed on sawhorses. A dipper and funnel were waiting to transfer the hot sorghum molasses to close-by containers. Anyone who has hovered in the kitchen, eagerly waiting to lick the coated spoons after a cake mix has been prepared can relate to the joy found in the next step of a stir-off. Children gathered around the empty vat with a piece of cane stalk and scraped the bottom of the kettle. Old-timers have fond memories of eating gobs of molasses stuck to the cane stalk. In a region where isolation and poverty were a way of life, and visits to the store a rare treat, sweet homemade sorghum on a stick was often remembered as the best tasting candy in the world.

Friends and relatives helped throughout the process so not only was the “chore” made easier, but folks enjoyed the opportunity to visit together. When the fire died down the vat was repositioned on the stones. A fresh load of wood was collected and stacked next to the fire pit. The next morning another load of cane was brought to the mill and the whole process would start anew. However, in the cool autumn air, there was always something special about that initial batch of sorghum molasses that came from the first “stir off” of the season.

Sorghum has a distinct taste that is somewhat harsher than sugar-cane molasses. For many generations, it was the only sweetener that was available to residents of rural Appalachia rather than honey or, on occasion, maple syrup. It was stored and used throughout the winter months up until the spring planting season. Sorghum was a welcome addition to a diet that was often bland or salty. Many folks raised on sorghum continue to prefer it to molasses or refined sugars.

Today, modern production techniques have increased the yields farmers can produce from equal plantings of cane. Sorghum syrup is a popular item at festivals and gift shops, not just in Appalachia, but throughout the South. Especially for farmers that were dependant on vanishing commodities like burley tobacco, sorghum has become an important cash crop providing an alternative source of income.

Sorghum syrup remains a distinct part of our Appalachian heritage. Through the years, it has been used for many purposes and in many recipes. However, most locals agree that the best way to enjoy sorghum is to pour it over fresh, hot, homemade biscuits – and if a little spills over onto some good pork sausage that is quite alright.