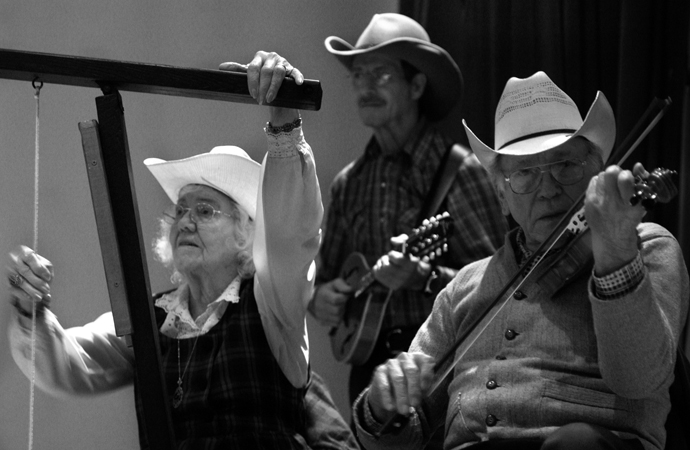 In Appalachia, Old-Time Music refers to a variety of traditional music styles — ballads, folk songs, fiddle and banjo tunes, sacred songs, and even some popular songs recorded in the early 20th century. It grew out of the mix of cultural influences — Native American, English, Scottish, Scotch-Irish, and African — that shaped Appalachia. Traditional stringed instruments such as the fiddle, banjo, guitar, upright bass, and dulcimer predominate. This music was originally played for family and friends, but with the invention of recording and radio in the early 20th century it was played more and more for profit. Several times it has seemed on the verge of dying away, but it has always revived. Today it flourishes through festivals, radio and television, CDs, and even computer downloads.

The life of Sylva’s Samantha Bumgarner is a fascinating story.  Born in 1878, her first banjo was a gourd with a cat hide stretched over it and strings made from waxed cotton thread.  At age 30 she became known as Aunt Samantha.  While her fame was not vast, her knack for playing traditional mountain music and weaving old-timey stories was legendary.  In 1924, she was the first person to ever be recorded “on wax” playing the five-string banjo.  One day she and another young fiddler, Harry Cagle, got in a big Cadillac with gold hubcaps and headed out west with Jackson County’s Dr. John Brinkley.  Brinkley, “the Goat-Gland King” became rich marketing a hormonal tonic (from goats) that promised to increase male virility.  Bumgarner and Cagle ended up playing on Brinkley’s southwest XERA radio station – booming 500,000 watts of power, and blanketing most of the United States.  In 1928, back in Western North Carolina, Bascom Lamar Lundsford encouraged her to play at the first Mountain Dance and Folk Festival in Asheville. She was a regular at that festival every year until her death in 1960.  When she performed for President Franklin Roosevelt, he too embraced her as Aunt Samantha.

The Appalachian musical heritage that influenced pioneering personalities like Aunt Samantha Bumgarner, Doc Watson, and Mother Maybelle Carter dates back hundreds of years.  Those contemporaries were carrying on a form of traditional music that blended and evolved from two very different cultures.  One culture was that of the early mountain settlers, primarily from England, Scotland, Ireland, and Wales.  The other cultural influence, from Western Africa, came with the slaves brought to America by white Europeans.

A few European songs were instrumentals that featured fiddles, dulcimers, and possibly a flute or fife.  However, most ballads were preserved in the oral tradition.  They were passed down between generations and often landed in far away mountain coves, courtesy of wandering travelers.  Usually without musical accompaniment and most often sung by women, these songs served two purposes.  They preserved a dimming European heritage while providing a welcome diversion from a hard life in a new land.  Eventually, whole families and church congregations began to develop “singing communities” that served as entertainment and respite from the rural reaches of Appalachia.

African culture in America was primarily “hidden” until after the Civil War.  Early slaves maintained ties to their homeland with a unique style of group singing, usually centered around work or worship.  The songs would be lined out by one person with a call – followed by a response action from a group.  Although birthed from human toil, African music was much more upbeat than the stoic European ballads.  In fact, it seemed to indicate a joyous celebration of life.  Ultimately, a distinct instrument emerged that would forever change the sound and style of Appalachian music, the banjo.  Originally from Arabia, it followed early traders to Western Africa, and eventually ended up in the New World.  Identified as a “slave instrument”, it was largely ignored until the 1860s.  With the banjo, African-Americans mixed the music of their native homes with the rhythmic structures they found in the new country, creating new genres of song and melody. 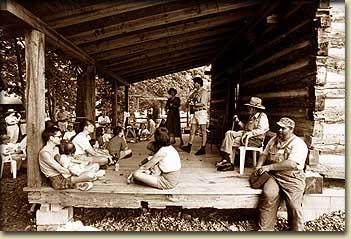 In rural mountain areas, fiddles, dulcimers, banjos, and eventually guitars combined with tight, tin, rising vocals to create a unique musical style like no other.  The racial mixing of Civil War armies, the development of the “blackface” minstrel show, and the rising popularity of black religious music helped to produce this new sound.  The sound we know as traditional, or even hillbilly, emerged as European and African cultures interacted and shared.

Traditional Appalachian music is more popular today than ever.  Culturally significant and entertaining it continues to serve much the same purpose it always has, providing a link to the past by connecting people in the present.  During the warm summer months there are festivals and dances just about every weekend.  Two of North Carolina’s most popular are the Shindig-on-the-Green in Asheville and Fiddler’s Grove several miles east in Union Grove.  Another favorite, the Mountain Folk and Dance Festival is the nation’s longest running event of its kind (since 1928).  If you want to join in the fun, plenty of information is available in local newspapers, entertainment magazines, visitor guides, and within the links provided below.  Whether you are a learner, listener, or player, music is one characteristic of our Appalachian Heritage that is available to everyone.

When asked what time the show begins, old-timey musicians get a faraway gleam in their eye and reply, “Oh, along about sundown …”

This essay was based on information provided by The Sylva Herald, Mike Seeger and Wayne Erbsen of NativeGround Music, and the magazine Musical Traditions.