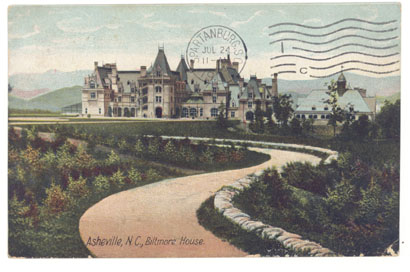 George Washington Vanderbilt II was born into money. His grandfather, Cornelius Vanderbilt, amassed a huge railroad and shipping empire. His father, William Henry Vanderbilt, financed the founding of New York’s Metropolitan Opera and Vanderbilt University. Upon William’s death in 1885, he claimed to be the richest man alive. It is not surprising his youngest son, George Washington II, would also follow in the grandiose footsteps of his family. However, the younger Vanderbilt would find his notoriety on a completely different stage. With his fortune he would construct what has been called the largest private, and certainly one of the most famous, houses in the world– the Biltmore Estate in Asheville, NC.

Selecting a name for his estate, Vanderbilt referenced his family– and the mountains of Western North Carolina. The name “Biltmore” is derived from “Bildt,” a Dutch town with citizens of Vanderbilt ancestry, and “more,” an old English term referring to rolling, mountainous countryside. Construction of the magnificent structure began in 1889. It took six years for over 1000 workers to complete the project. Located just south of downtown Asheville, the estate originally included 125,000 acres of Appalachian forestland. The main house is sprawling. It boasts 175,000 square feet, 250 rooms, and 65 fireplaces, all within 4 grand levels. In the late 1800s, the area was still so remote that Vanderbilt had to build a private railway to the site to transport supplies. He also constructed a village complete with a post office and a church to accommodate the laborers and their families.

With Biltmore, Vanderbilt planned to replicate the working estates of Europe. Renowned architect Richard Morris Hunt combined the plans of several French chateaux in his design of the house. Vanderbilt hired one of the most celebrated landscape architects in the world, Frederick Law Olmstead, to plan Biltmore’s magnificent grounds and gardens. Olmstead is noted for designing New York’s Central Park and the Capitol grounds in Washington, D.C.

In addition to Hunt and Olmstead, Vanderbilt made another insightful hire. The forests around Biltmore were put under the watchful eye of Gifford Pinchot. Recognized as one of the first to apply the term “conservation” to natural resources, Pinchot was the perfect choice to manage the vast tract. His scientific approach to “planned forestry” was something new and marked a shift in the nation’s approach to renewable resources. He went on to be the first director of the U.S. Forest Service. Upon his departure, Dr. Carl Schenck was hired by Vanderbilt as Biltmore’s chief forester. Schenck went on to found the Biltmore Forest School, which eventually became today’s Cradle of Forestry, America’s first forestry school. There is an additional interesting detail about Vanderbilt’s land holdings. Upon his death in 1914, his wife sold much of Biltmore’s original 125,000 acres to the federal government, enabling the creation of Western North Carolina’s Pisgah National Forest.

Biltmore’s astonishing “vital statistics” indicate its larger-than-life appeal. It boasts 4 acres of floor space, 3 kitchens, 3 laundry rooms, 35 bedrooms, and 43 bathrooms. The library has 10,000 books and a ceiling painting that covers over 2000 square feet. During construction, its on-site kiln produced more than 30,000 bricks a day. Over 250 acres of landscaped gardens contain almost 4000 roses and azaleas. Over 100 miles of trails wind through the Estate. Modern vineyards annually produce over 200 tons of grapes and 75,000 cases of wine. The Tasting Room for the winery was originally the milking parlor for the dairy. There were over 80 cows which could be milked at the same time. The Estate employs approximately 1500 people and hosts almost one million visitors every year … and the number of residents that currently live in the Biltmore House: 0.

Hundreds of years ago, the forests around Biltmore were home to many Cherokee communities. Archaeological sites have been unearthed and continue to be researched. Local scholars and students of all ages learn about Native American and mountain history with assistance from Biltmore’s resources. A working farm village, equestrian center, and biking trails are also popular interests found on the Estate. Biltmore has long been a favorite of Hollywood. Over the years, feature films starring Robert Redford, Peter Sellers, Anthony Hopkins, Tom Hanks, and others have been “shot on location.”

Originally self-sustaining, the Estate was set up with poultry, cattle, and hog farms. Biltmore Brand dairy products were a favorite in Western North Carolina for several generations. As trends evolved, the Estate became more focused on tourism and preservation. Its vineyards now produce award-winning wines. A luxury hotel and several restaurants are located within the main gates. The sounds of outdoor concerts fill the air during the warm summer nights. For many years, period decorations and holiday activities have made Christmas a special event at Biltmore. A National Historic Landmark, it is no surprise that today’s Biltmore Estate is proud of its history. It’s rich past and vibrant present are a valuable component in our region’s heritage.