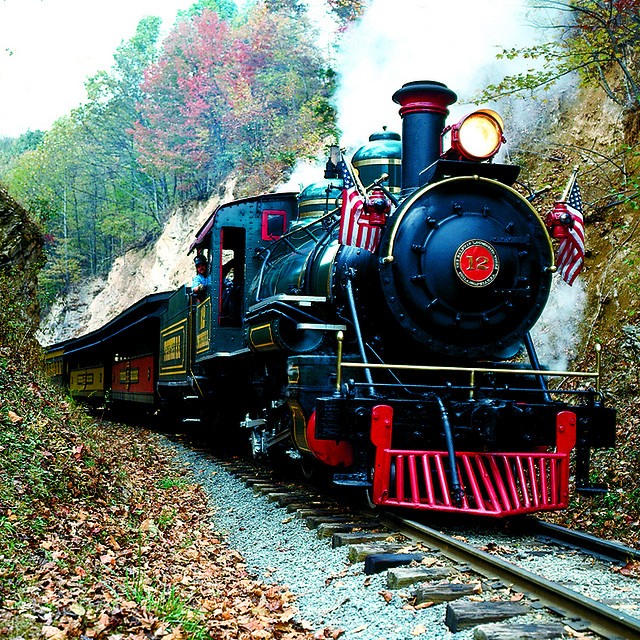 One of the most historic railroads in Southern Appalachia, Tennessee & Western North Carolina, ran from Johnson City, TN to Boone, NC from the late 1800s until 1950. It was born when the Tennessee state legislature granted a charter to construct the railroad in 1866. Primarily, it was to provide access to the iron mines located over the NC state line in the community of Cranberry. Thirty-two miles of rail were laid in the rugged mountains that comprised the steep divide between the two states, and the ET & WNC began its first scheduled freight routes in 1882. At the time, it was the highest railroad system operating in the Eastern United States. In 1919, after additional expansion, the line extended its service into the mountain community of Boone. This growth added passenger rail service to what had been one of the most isolated areas of the Blue Ridge Mountains, as well as provided increased commercial activity. Besides iron ore, the ET & WNC carried lumber for the growing timber industry that was sweeping the southern Appalachian Mountains

new rail line changed the lives of the people in Boone and surrounding communities. Their attachment to the ET & WNC became legendary. The rail system became affectionately known as the “Eat Taters & Wear No Clothes.” It was one of their few sources of contact with the outside world during the Great Depression. Respected and loved for their caring ways, employees of the ET & WNC were known to pick up items “in town” for those unable to make the trip – and even sometimes let locals jump aboard and ride for free. When questioned about their generosity they replied: “Well, we were going that way anyhow!” Before the days of the it was often commented that the only way to get to Boone was to be born there. The whistle of the ET & WNC was a comfort to local residents. Its familiar, shrill echo rang through the mountain valleys. That sound provided the train with another fitting nickname, The Tweetsie.

The Tweetsie eventually fell victim to time. By the 1950s, roadways were reaching into even the most rural and isolated mountain communities. Passenger travel and commercial trade began to shift from train to auto and truck. A devastating flood in 1940 destroyed miles of railway in Western North Carolina. While its tracks were being repaired, the region depended almost exclusively on non-rail transport. The railroad, even after repair, never reclaimed its dominant presence in the region. Progress, the economy, and Nature had exposed the railroad operators to the harsh reality of the future. The ET & WNC completed its final run on October 16, 1950. However, its history does not end there.

The ET & WNC had been powered by a rotating team of thirteen coal-powered engines. One of those, Tweetsie locomotive #12, was purchased by railroad preservationists and shipped to the area of Virginia. In 1954, Hurricane Hazel swept through coastal VA. The rail tracks supporting old #12 were destroyed, but the engine escaped major damage. Hollywood came to the rescue of this last relic of the Tweetsie. Cowboy actor Gene Autry purchased the #12 and planned to use it in western films. That goal never materialized, and in 1956 Blowing Rock native Grover Robbins obtained the locomotive from Autry. Robbins also located and bought several old train cars from various mountain rail lines. He had # 12 and the salvaged cars sent to Hickory where they were restored to their original operating condition. In 1957 the entire group, locomotives and cars, were trucked to a scenic site near Blowing Rock. Positioned just three miles from the Boone train station, which had hosted the ET & WNC on thousands of freight runs, the Tweetsie was “back home.”

That summer a new tourist attraction officially opened in Western North Carolina. around Locomotive #12, Tweetsie Railroad made her first run. However, this time she was not hauling timber and coal. Rather she was carrying railroad buffs, fascinated adults, and delighted children. It was noted that people came from all over the South once again to hear her shrill whistle echoing through the mountain air. The Tweetsie now follows a scenic three-mile loop. Along the ride, visitors are “attacked” by Plains Indians and Wild West outlaws. Luckily, the tourists are always rescued by the marshall and his deputies.

In 1960 Tweetsie acquired a second locomotive, the #190 “Yukon Queen.” Both engines were built by Baldwin Locomotive Works in Philadelphia, #12 in 1917 and #190 in 1943. Number 12 weighs in at 93 tons and #190 at 105 tons. All Tweetsie train rides are pulled by one of these two vintage locomotives. Recently, Tweetsie gained additional recognition when it was accepted for listing on the National Register of Historic Places.

The Tweetsie Railroad is open from the beginning of May through the autumn leaf season near the end of October. In addition to the action-packed train ride, visitors can enjoy live Wild West saloon shows, a chair-lift to Miner’s Mountain, amusement rides, a deer park, and panning for gold. A one-price admission includes all the different activities. Also, the railroad operates a shop on site that rebuilds and restores locomotives for museums and other historic railways throughout the nation.

The Tweetsie Railroad is vastly different than its predecessor, Tennessee & Western North Carolina. However, it enables locals and tourists alike the opportunity to experience the thrill of the beautiful mountains of our region aboard a coal-powered steam engine. Riding the Tweetsie, it is possible to close your eyes and imagine another time, to imagine the history that is part of this valuable component of our mountain heritage.