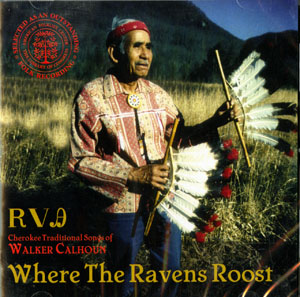 Several hundred years ago the Cherokee people lived in parts of what are now Alabama, Georgia, the Carolinas, Tennessee, Kentucky, and the Virginias. The Cherokee people were not migratory. Instead they farmed, hunted, and tended livestock. They lived in permanently constructed villages of log, cane, and mud structures. The largest single tribe in the South, they referred to themselves as Ani Yunwiya, “The Principal People.” The name “Cherokee” was actually given to them by other Native-American tribes and is translated.

The Cherokee first encountered Europeans in the mid-16th century when Hernando De Soto and his men were exploring the region. Thus began a long struggle for domination and survival. Eventually the great Cherokee nation was decimated and its remaining citizens divided. The largest group was relocated west to Oklahoma along the Trail of Tears. A handful remained in the southeast and, centered in the mountains of western North Carolina, eventually formed the Eastern Band of Cherokees. However, the Cherokee also faced a different, separate struggle. This was the challenge to keep their spirit, tradition, and culture alive.

After the forced removal of the Cherokee in 1838, the United States government tried to “civilize” them. By the 1890s, the Bureau of Indian Affairs was insisting all that Native-American children learn to speak English, receive a “white” education, and practice a “Christian” religion. This aggressive acculturation took its toll, and traditional Cherokee practices slowly began to disappear. However, many Native-Americans were determined to preserve their heritage. One, the 19th-century Cherokee medicine man, Swimmer, passed his knowledge to a young boy, William West Long. Long was a wonderful cultural and spiritual leader. Beginning in 1904, he taught traditional values, language, dance, and song to several generations of Cherokee. By the time Long died in 1947 he had passed on his enthusiasm to his nephew. That nephew would become the premier tradition-bearer for the Cherokee Indians during the late 20th century. From his uncle he learned songs, stories, dances, and Cherokee religious practices. His name is Walker Calhoun.

Walker Calhoun was born in 1918 and has lived his entire life in the Big Cove community of Cherokee, North Carolina. He and his wife, Evelyn, married for over fifty years, have over 60 children, grandchildren, and great-grandchildren. Modern Cherokee is a bustling tourist destination with gambling casinos, Indian souvenirs, restaurants, and museums. However, the Cherokee that Walker remembers was a much different place. One gets a feel of that history traveling the curved road approaching his small house nestled in the Great Smoky Mountains. The Calhoun family has lived in this cove for many generations alongside the Raven’s Fork river under the shadow of a large mountaintop rock outcropping.

Walker remembers strumming an old Sears catalog banjo he shared with his brothers as a boy. Later a guitar appeared, and soon young Walker was learning to finger-pick traditional mountain ballads. However, when he was alone Walker often played his true favorites, the ceremonial, Cherokee dance songs taught to him by his family steeped in the spirit of the ancient Cherokees. In fact, up until he was 12 years old, the only language Walker had heard was Cherokee. His family loved to participate in traditional Cherokee song, music, and dance. Embracing these ancestral ways nurtured and helped families like the Calhouns remember and honor their past, in spite of a frequently difficult present.

At an age when many people are thinking about retirement, Walker Calhoun actually began a new career: performing the Cherokee art he had cherished his entire life. In 1984, at a gathering of the Eastern and Western Cherokee Nations, Walker took the stage. In a strong voice he sang the traditional ceremonial songs he had been taught as a boy. So popular was his performance that he was urged to develop a stage presentation. As a result he assembled members of his own family to form the Raven Rock Dancers. Fully outfitted in ceremonial regalia, the group performs and preserves the ancient Bear Dance, the Stomp Dance, the Green Corn Dance, and the Quail Dance. Walker likes to point out that these dances represent the natural links that gave life to the Cherokee in the not-too-distant past. The Raven Rock Dancers quickly became recognized as authentic tradition-bearers of native Cherokee song and dance. Today they travel extensively, performing at festivals and powwows throughout the country.

In addition to music and entertainment, Walker is a respected spiritual leader who is highly knowledgeable about Cherokee history, lore, religious practices, and herbal healing. He is skilled at creating an ancient Cherokee hunting weapon, the blowgun. Fashioning the gun from river cane, he uses wild thistle to construct a lethal dart. Another important part of Walker’s work are his efforts to bridge the distance between the two Bands of the Cherokee. He frequently travels between North Carolina and Oklahoma encouraging understanding, cooperation, and cultural exchange.

Walker Calhoun has been recognized for a lifetime dedicated to preserving the heritage of the Cherokee people and the region. In 1988, at a gathering of the Eastern and Western Bands, he received the first Sequoyah Award in recognition of his efforts and contributions. That gathering commemorated the 150th anniversary of the Trail of Tears. In 1990 he received the North Carolina Folk Heritage Award, and in 1992 he received a National Folk Heritage Award from the National Endowment for the Arts. Two popular recordings of his songs are available: Where the Ravens Roost and Sacred Songs from Medicine Lake.

Walker Calhoun and his family are keeping alive ancient and endangered ceremonial arts and customs. When visiting the region, visit the reservation and take advantage of their hard work, love, and dedication. You will be truly awed by this valuable and unique part of our mountain heritage.