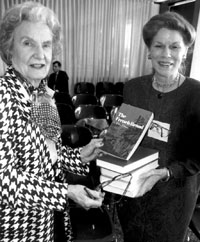 Wilma Dykeman of Asheville, North Carolina, was a major Appalachian author. Her novels “The Tall Woman,” “The Far Family,” and “Return the Innocent Earth” vividly evoke life in the region as it experienced rapid change between the Civil War and the 20th century. They reflect her desire to counteract negative stereotypes and present Appalachian culture in a positive light. Her book about western North Carolina’s major river, “The French Broad,” has been praised as an early warning about the consequences of environmental degradation. She was a passionate advocate of Appalachia’s history and culture. She taught occasionally at the University of Tennessee and was an active public speaker. She won many awards and honors for her writing, including a Guggenheim Fellowship.