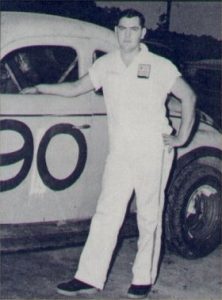 Back in the 1930s and 1940s, when moonshining was a means of survival in the mountains of Western North Carolina, a young man emerged who would go on to become one of NASCAR’s founding fathers. Like many Scotch-Irish descendants living in rural Appalachia, he was described as brave, simple, and independent. He reinforced the romanticized, cultural stereotype of a “noble rogue.” His name was Junior Johnson.

Johnson was born in Wilkes County, North Carolina, in 1931. His father supplemented his living from farming by making and selling moonshine. A gallon of “shine” sold for four dollars and generated additional income that helped put food on the table for many families in the impoverished, Depression-era Appalachian region. Johnson began driving his father’s moonshine down to Charlotte at an early age, making his first “run” at age 13. That route often was the stage for a game of cat-and-mouse with pursuing federal agents. Soon the “runners” begin to build faster cars and combined that speed with raw, daredevil driving to evade capture by the authorities.

Leisure time often found the moonshiner runners gathering in large pastures competing in informal races showing off their fast motors and driving skills. It was in this environment that Junior Johnson became known to his peers as the man to beat. His cars weren’t always the fastest, but his exciting, hard-charging style of driving won him recognition.

After WWII, the economy in western North Carolina improved. Young men often used their money to purchase the latest status symbol, a car. On weekend nights they would join with moonshine runners to compete in the wild auto races on the new oval dirt-tracks built in North Wilkesboro or Hickory. Junior became a frequent participant and winner of these local competitions. He gradually abandoned moonshine running and for the legal activity of stock car racing. His first official entry was in Darlington, South Carolina’s Southern 500 in 1953.

Johnson had compiled an impressive list of victories by the time he won his first super speedway race, the 1960 Daytona 500. It was in that race, finding his car to be slower than most in the field, that he developed the concept of “drafting.” Positioning his car close behind another, he encountered less wind resistance and used that advantage to gain additional speed. When he retired from driving in 1966 with over 50 speedway victories, he was recognized as one of the all time greats in the sport.

Not yet 40, Johnson became a successful race team owner and car builder. Despite his lack of formal education, he had an honest and simple wisdom about him. He branched out into chicken farming, construction, and food processing. His pork rinds and other products claim a loyal following. He is the personification of the home town boy who makes good. His southern Appalachian values appealed to many rural, blue-collar Americans.

Johnson never strayed far from stock car racing. He introduced the R.J. Reynolds Company to Bill France, an early racing promoter. This matchmaking between tobacco and auto racing led to the creation of the Winston Cup. This ushered in the era of corporate sponsorship and led to the development of modern day NASCAR. Junior’s racing teams have provided cars for the sport’s elite drivers – with names like Cale Yarbrough, Bobby Allison, and Darrell Waltrip. Johnson remains close to his North Carolina roots. His inspiration helped the Tarheel State produce other racing legends like Richard Petty and Dale Earnhardt.

Even in retirement, the Johnson name is still a formidable presence in racing. His legacy embraces the sport he nurtured into maturity. A modest man of few words, Junior Johnson resides near his boyhood home in Ronda, NC. With his many accomplishments, he continues to treasure most an opportunity to remain close to the origins of his Appalachian Heritage.

This Heritage Moment was based on information provided by David Sarratt at the University of Virginia and essays from the MotorSports Hall of Fame and http://www.juniorjohnson.org