If you want a forecast of the coming winter’s weather, just ask a woolly worm. That’s what many people in Appalachia have done for generations. The worms, otherwise known as the caterpillar larva of the Isabella tigermoth, wear 13 alternating black and brown stripes. According to woolly worm prognosticators, each stripe corresponds to one of the 13 weeks of winter, from December to March. The darker the stripe, the colder and snowier the weather for that week. Banner Elk in Avery County has been hosting a Woolly Worm Festival since 1978, and it claims 82% accuracy for its woolly weathermen. So if you want a headstart on the forecast for next winter’s weather, head for Banner Elk in October.

Not too many generations ago, before snow plows, central heat, and supermarkets, winters in Appalachia were a much different experience than they are today. Many basic necessities such as mobility, heat, and food were not taken for granted. Residents of the rural, agrarian region spent the temperate months planning and preparing for the hardships severe and unpredictable weather could cause. Barns and houses were repaired, fuelwood was cut and gathered, and foodstuffs were harvested and stored. In contrast, today, winter is welcomed by many. Skiing and snowboarding are popular. Locals gather around large bonfires or propane heaters to enjoy friends. Warm houses fill with company, and “comfort” foods like stews and chili simmer in large vessels. However, whether individuals run outside or hunker down inside, knowing what weather to expect is important. Media stations alert the public to approaching storms and frigid temperatures days in advance. Nonetheless, even with modern conveniences, a vast infrastructure, and various technologies, many Appalachian residents still rely on a traditional method to predict the severity of the short days and long nights of winter: the Woolly Worm. 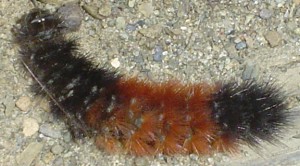 The woolly worm, or “woolly bear” to non-southerners, is a caterpillar often sighted in the autumn months weaving through the grass or along the branches of trees and bushes. These beautiful creatures are not just taking a walk; they are in search of a sheltered location to spend the winter. The coat of the woolly caterpillar is a cold weather survival mechanism. It is so effective that woolly worms have been known to survive entire winters completely frozen in an ice cube. While most caterpillars become moths in less than a month, the woolly worm crawls under a rock or fallen log and hibernates in a larvae stage until spring. It then awakens and continues to feed before forming a cocoon. After about two weeks, an orange-yellow moth emerges. Just about everyone is familiar with the caterpillar stage, but few realize each fuzzy, 1½ inch worm eventually becomes an Isabella Tiger Moth. The moth is of medium size. Its wings lack distinctive markings, but the abdomen is marked by rows of small black dots. The Isabella Tiger Moth is active throughout the summer – laying eggs so more woolly worms can emerge to spend the warm months feeding on dandelions, clovers, and just about every variety of grass and weed.

The appearance of woolly worms makes them easy to recognize. Obviously fuzzy (woolly), they are black at both ends, and sport a reddish-brown or rust-colored middle with alternating stripes. As would be expected, woolly worms become larger (and longer) during good growing seasons. Since their coloring is based on how long the caterpillar has been feeding, plentiful food results in a narrower middle section and longer (wider), dark-colored tips. Woolly worms shed their skins or “molt” six times before reaching adulthood.  After each molt their coloring becomes less black and more reddish, so coloring also indicates age. Furthermore, there are over 250 species of tiger moths, so many of the apparent color variations found in woolly worms are often the result of happening upon a different species. However, the true woolly worm of the Isabella Tiger Moth has the stripes mentioned above, alternating between black and lighter shades.

Outsiders often ask residents of Appalachia if woolly worms can really forecast winter weather. Now the uninitiated may claim there is no scientific evidence suggesting that woolly worms can predict the weather and that variations in their bands are linked to differences in species and larval stage, not cold, rain, sunshine, or clouds. However, the uncanny forecasting talents of the woolly worm have been a part of traditional lore for so many generations that is bound to be true! Mountain folk insist a careful observation in the fall of these short, fuzzy caterpillars is an accurate method to determine the severity of the approaching winter. However, it takes an experienced and well-trained eye.

First, you look at the size of the bands. If the size (or width) of the interior band on a woolly worm is narrow than it is likely a harsh winter is approaching. If the interior band is wide and the black bands on each end are shorter, a mild winter can be expected.  Next, forecasters will examine the color of the woolly worm. If the front end of the worm is darker than the back, then the first part of the winter will be severe, the latter mild. Reverse the colors and the forecast reverses as well. Also, if the thirteen alternating stripes in the center band are dark, that is an indication of a long, cold winter. A mild season can be expected if the stripes seem especially light.  Finally, to make sure his prediction is apparent, the woolly worm will only travel in one direction. If he is migrating along a southern route then beware – winter is going to be especially harsh. However, if the caterpillar is crawling rapidly (for a worm) in a northern direction, then winter will be sunny and mild rather than bitter and blustery. 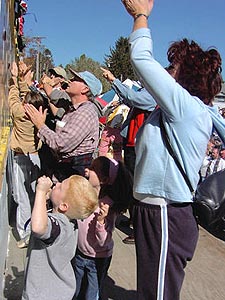 In recognition of the woolly worm’s seasonal and cultural contributions, every year a celebration is held in his honor. Since 1978, on the third weekend in October, nestled between North Carolina’s two biggest ski resorts, the town of Banner Elk hosts the annual Woolly Worm Festival. Twenty thousand people attend the three-day event that features crafts, food, and live entertainment.  However, the big draw is the Woolly Worm Races – when in addition to a $1000 prize, the winner is chosen the official winter forecasting caterpillar. Races begin each morning around ten. Individual heats consist of 20 entries and races continue all day until the grand final occurs in late afternoon. On Saturday, the winning worm is declared the grand prize recipient. The Sunday worm races are for fun, small prizes, and prestige. Worms are required to complete a grueling climb up a three-foot length of string. Past winners include famous entries such as Merryweather, Patsy Climb, and Dale Wormhardt. There is no home-field advantage and no preferred age for the person sponsoring a worm (although worms raced by children do seem to win a bit more frequently). In 2006, an audience member commented, “there is no other experience in life that can produce the absurd euphoria that comes from cheering for a caterpillar to climb a string!”

So next year, for great fun and a sample of Appalachian heritage, head to the Woolly Worm Festival, one of the top ten fall festivals in North America. There, and in many parts of southern Appalachia, you can get a firsthand look at one of nature’s truly remarkable creatures. At that time, you must decide to believe either what modern science tells you or follow the sage advice of native mountain folk and listen to the wise woolly worm. However, whatever you choose, remember that this fall’s woolly worms will become next spring’s moths – and that in itself is a pretty amazing feat!

The text was written primarily with help from, and additional information is available at, the following sources: 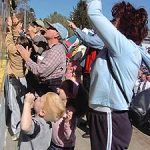 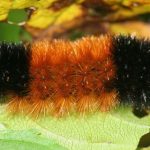 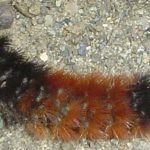