German Settlers in the Appalachians

People of German descent are one of the largest ethnic groups in the United States.  They came to be known by the misnomer “Dutch” because Germans refer to themselves as Deutsch.  Germans’ persistent and hardworking nature allowed them to thrive in backcountry settlements such as the Southern Appalachians.  People of German heritage have contributed greatly to American society and culture.  They like other European Americans left their homeland to escape poverty, hunger, religious persecution, and establish a better life.

The majority of German immigrants to the United States were from the Palatinate, a fertile area of the southern Rhine River Valley.  In the 17th and 18th the people of the Palatinate suffered from seemingly constant hardship.  Peasants were dominated by feudal lords who taxed the poor heavily in order to support their lavish lifestyles.  The official faith of a particular region was determined by its ruler.  Therefore, peasants whose religion differed from that of their lords faced persecution.  The exploitation of the people of the Palatinate by their lords was not all that they had to suffer. 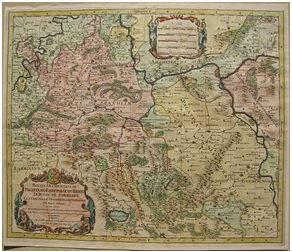 The Palatinate was repeatedly invaded during the Thirty Years War, (1618-1648).  Invading armies burned towns and crops across the Palatinate during this conflict.  Before the region could recover from this terrible devastation, Louis XIV, king of France, renewed the persecution of Protestants.  His armies invaded the Palatinate multiple times in the 1680s and 1690s to bolster France’s claims in the region.  Then natural disaster increased their hardship.  The harsh cold of the winter of 1708-1709 killed fruit vines and trees, froze wine in and killed livestock.  Louis XIV continued his invasions of the Palatinate during the war of Spanish Succession (1701-1714) hoping to win the throne of Spain for his grandson Philip.  A European wide famine in 1740 and 1741 again made life in the Palatinate unbearable.  These successive hardships encouraged the people of the Palatinate and areas to leave in droves.  In the 17th and 18th centuries, the Palatinate would lose hundreds of thousands of inhabitants.

The port of Philadelphia was the primary landing place for immigrants arriving directly from Germany.  In the spring of 1709, approximately one thousand Germans arrived in the British-American colonies per week following the harsh winter of 1708-09.  By 1776, approximately 110,000 Germans had immigrated to the British-American colonies.  The majority arrived in Pennsylvania, but as competition for good land increased, the  Germans, like their the Scots-Irish, began to look for new territory on which to settle.

Germans in the Shenandoah Valley of Virginia

The first European to see the Valley of Virginia, on August 20th, 1670, was a German named John Lederer.  Lederer had been hired by Virginia governor, Sir William Berkeley, to gather information on the Blue Ridge Mountains. 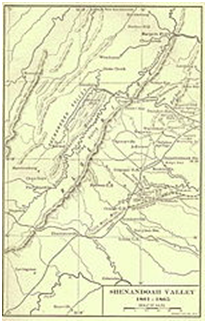 The fertile Shenandoah Valley between the Blue Ridge and Allegheny Mountains attracted settlers looking for good land to farm.  The earliest German settler in the valley was Adam Miller (also Muller and Mueller) who arrived between 1726 and 1727. In 1727 German settlers established New Mecklenburg which was incorporated in 1762 as Shepherdstown.  The historic town of Harper’s Ferry was established at the Great Falls, the junction of the Shenandoah and Potomac Rivers, by a German Robert Harper in 1734.
In the early 18thcentury, increased French activity in the Ohio country prompted Virginia’s government to take actions to defend the Old Dominion’s western claims.  Therefore, in 1730 Virginia’s laws were changed to grant land speculators a thousand acres for each family they could settle west of the Blue Ridge, a law intended to create buffer settlements, of primarily Scots-Irish and Germans, in the mountains to settlements in the Piedmont and Tidewater regions.  German Jost Hite established one of these buffers communities, the Opequon settlement, in 1731.

Recently arrived immigrants from Germany finding less land available than they had hoped for in Pennsylvania, along with second and third generation settlers, gladly took up the offer of cheap and fertile land in the Shenandoah Valley. Large numbers of Germans from Pennsylvania swept into the valley before and during the American Revolution.  After the Revolution, Germans pushed into the Southern slope of the valley below Lexington.  This protected and profitable valley became a predominantly German area before the 19th century.

Germans in the Mountains of North Carolina

For frugal German the inexpensive land in the Great Smoky Mountains of western North Carolina was a wonderful temptation.  This was especially true after North Carolina established a free “headright system” in the late 18th century.  This “headright system” gave one hundred acres to male heads of household who were willing to settle in western parts of the state.  The Germans of western North Carolina generally migrated from Pennsylvania to the Yadkin River Valley.  When the Yadkin valley began to become crowded, children of settlers there moved to the Catawba River Valley.  As the next generation grew to and desired their own decently sized farms, they moved west again.  A few migrated directly from Pennsylvania.  Others came from the Moravian settlement of Wachovia, now Forsyth County.  Most of

Wachovia’s population had migrated directly from Pennsylvania.  A few other German families came west from New Bern on the East Coast which was settled by German-Swiss in 1710. 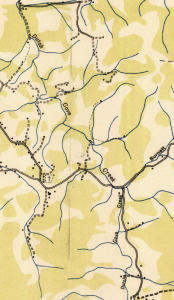 The Dutch Cove area of Haywood County, located to the southeast of Canton, NC. Image from 1935 U.S.G.S. map.

German settlers generally settled in the same areas as their who were mostly Scotch-Irish.  However, several areas in the Smoky Mountains of Western North Carolina were settled by and named for Germans.  These include Dutch (Deutsch) Cove, a community in Haywood County established in 1796 by a Revolutionary War Veteran of German descent named Christian Sargent Messer. The Plott Balsam Mountains in Haywood and Jackson Counties were named for the Plott family, German immigrants who settled on Plott Creek in 1801. Johannes Plott, who first immigrated to North Carolina in the 1750s, crossed the Atlantic with his family’s hunting dogs.  His son Henry, who settled in western North Carolina in 1801, continued to develop the breed.  Others recognized the dogs’ value and soon Plotts one of the preferred hunting breeds in the mountains.  Today, Plott Hounds are one of four recognized breeds that were developed in the United States.