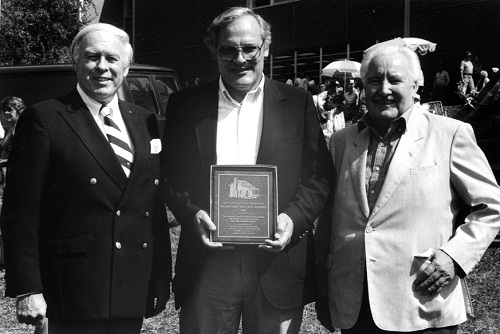 The 1987 Mountain Heritage Award Saturday, September 26, was given to the Jackson County Historical Association for its new book, “The History of Jackson County,” edited by Max R. Williams.

The History, the work of 14 contributing authors, was published just as the award was presented by Western Carolina University at its 13th annual Mountain Heritage Day.

Copies were delivered Saturday morning from the publisher and were on display in the Mountain Heritage Center where a new exhibit on the county was opened.

A 675-page illustrated history, the book has already been acclaimed by William S. Price, director of the North Carolina Division of Archives and History and Dr. Lindley Butler, coeditor of the landmark book, “The North Carolina Experience.”

In presenting the award to the association and Williams, WCU Chancellor Myron L. Coulter said, “if we fail to know and preserve our history at the grass roots, we reduce all history.”

The association under Williams’ “tutelage, cajoling and skillful pen” produced “a lively, sound, enduring, accurate and authenticated work that will stand well the scrutiny of native experts and scholarly critics alike,” Coulter said.

The project grew out of the North Carolina 400th Anniversary celebration when John Bell, a WCU history professor, suggested it in 1984.