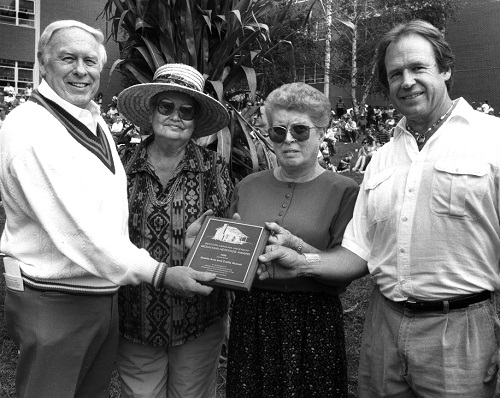 CULLOWHEE – The 1992 Mountain Heritage Award was presented by Chancellor Myron Coulter to Qualla Arts and Crafts Mutual, our nation’s oldest Native American craft cooperative.  Owned and operated by Cherokee artists and craftspeople, Chancellor Coulter said that the cooperative was selected for the award, because of its “singular role in the recapturing and preserving of disappearing arts and crafts among the Eastern Band of Cherokee Indians.”

The artisans and crafts people in the cooperative, Coulter told the thousands gathered for WCU’s annual Mountain Heritage Day, “have been a major part of a renascence of tribal arts and crafts for more than 40 years.”

In the process, he said the mutual is responsible for making the 57,000-acre Qualla Boundary “one of the most vital contemporary Indian crafts areas in the United States.”

The Indian Arts and Crafts Board of the U.S. Department of the Interior singled out Qualla in 1980 for its “many lasting contributions to the well-being of Indian artists and craftsmen” and cited it for keeping alive the arts and crafts of the Eastern Band of Cherokee Indians.

Coulter said that while the award recognizes the work of the cooperative, “in a larger sense this award is made to the men and women of Cherokee in whose artistry resides one of our region’s most beautiful and important treasures, a treasure that they and the Qualla Arts and Crafts Mutual have husbanded, restored, and shared to the enrichment of all of Western North Carolina.

Receiving the award for Qualla was its vice president, Lloyd Carl Owle, the famous Birdtown woodcarver and sculptor, and Betty Bupree, the “Red-headed Cherokee” who has been manager of the cooperative for 20 years.

“If it had not been for Qualla,” Dupree said, “there would be no crafts today. But paying quality prices and having a place where people could bring their baskets and weavings and carvings have preserved them.”

She said that for almost half a century Qualla has provided a place for Cherokee to sell and market the creations of their hands, and get the recognition of their work that they so greatly deserve and “and continue the artistic traditions inherited from their forefathers.” 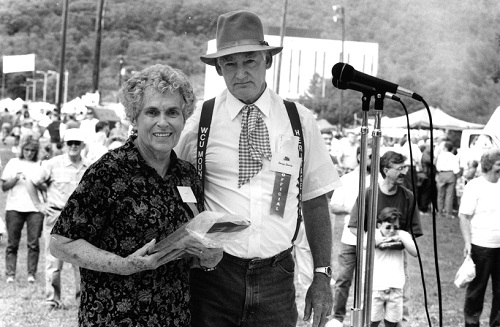 Long recognized as the most outstanding Indian-owned-and-operated arts and crafts cooperative in the United States, Qualla came into being in 1946 when the work was the only source of income for many a family on the Cherokee reservation.

At that time, Cherokee crafts workers and tribal leaders and some dedicated teachers in the schools realized that action was needed to improve conditions under which Indians craftsmen were struggling if Cherokee arts and crafts were to survive.

As Mollie Blankenship, an executive board member of Qualla and author of a brief history of the organization, recalled, craft workers then faced low prices paid by shop owners for their work, a lack of a market in winter months, a general decline in the quality of their work because of the poor incentives to improve, and the absence of any organized effort to promote the craftsmen as the artists they could be.

To help correct the situation, teachers were hired to teach basket weaving, beadwork, pottery, jewelry, and waving in the Cherokee Indian Craft Co-op. The group borrowed $2,300 from a student organization in the high school and with the help of the school teachers established a sales outlet in the school building on a hill above the Cherokee Agency in Cherokee.

One of the great workers in the effort was Gertude Flannagan, head of the Home Economics Department of the Cherokee Indian School. In 1946, the scope of her work was greatly enlarged when she was hired by the Indian Arts and Crafts Board as an arts and crafts specialist for all Southeastern Indian tribes, with headquarters in Cherokee this enabling her to continue to assist the Qualla Boundary cooperative.

In 1955, sales began a period of rapid growth and the organization was incorporated under the name Qualla Arts and Crafts Mutual, Inc.

Five years later it had become so successful that the group undertook a building program that resulted in the first attractive sales shop owned by members.

Continued success brought a complete remodeling and enlarging project in 1976 to provide additional sales space and expanded facilities for special exhibitions and also to provide a section to display a growing collection of contemporary Cherokee arts and crafts.

Since then Qualla has sponsored workshops to introduce new ideas and techniques, to increase production, and to improve quality of the workmanship.

Three-fourths of Qualla’s 315 members are women who produce in their spare time when not engaged in the responsibilities of raising their families.

Form the beginning, Qualla’s goal has been to pay the producers more for their accomplishments at the time of purchase and, as a member of a cooperative, realize extra benefits through the payment of dividends, the organization, and through equity payments.

Of all purchases from a member, Qualla automatically makes a dividend payment of 5 percent, payable each six months. At Christmas the members get a 3 percent equity check on the amount of stock he has. And when a member reaches 60 years of age they can draw $1,000 a year from their equity, what the senior members call ‘the old folks’ money.”

Members stock amounts to around $3 to $4 million. And there are some big stockholders with thousands of dollars in the mutual.

“My goal,” said DuPree, “is to keep the organization going for another 50 years. It will. I won’t be here but Qualla will go on….” 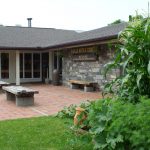 A photo of the Qualla Arts and Crafts building in the day. 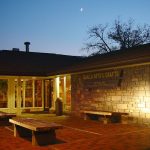 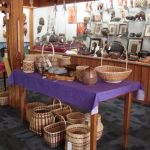 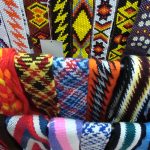 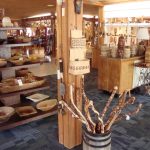