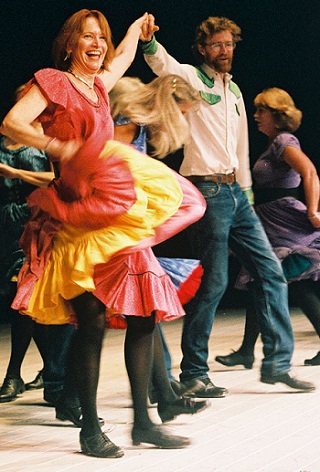 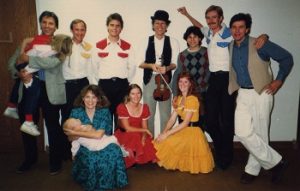 The Green Grass Cloggers were organized by students of East Carolina University in 1971. Rather than using the “big-set” square dance figures of traditional freestyle clogging teams, the group used choreography based on four-couple Western square dance figures, performing short energetic routines designed for audience appeal. The cloggers’ footwork was synchronized, as in precision clogging, but its performances included high kicks and other

The troupe won the World Clogging Championships in 1971 and 1973. The Philadelphia Folk Festival is 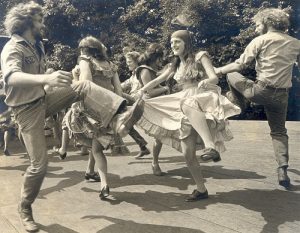 The Green Grass Cloggers during the 1970’s.

noted as being the team’s first “big break” in the national festival scene, inspiring group members to dance on a more regular touring schedule. Part of the group that was interested in becoming a full-time touring dance company formed the “Road Team” in 1977, and that group relocated to Asheville in 1980. The Road Team continued touring nationally and internationally until 1988, while the “Home Team” continued to perform in eastern North Carolina.

(Excerpted from an article by Phil Jamison in the “Old Time Herald,” and information provided by Trina Royer.) 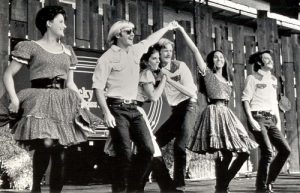