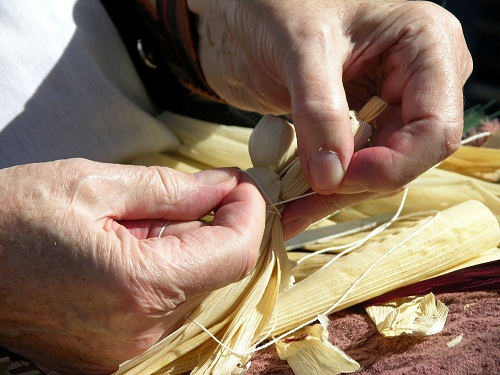 Heritage awards presented at the festival

Western Carolina University presented its 2010 Mountain Heritage Awards on Saturday (Sept. 25) to the late Annie Lee Bryson, a Cullowhee craftswoman who was known as the “Corn Shuck Doll Lady,” and to Asheville’s summertime musical tradition Shindig on the Green.

The awards presentations were part of activities at the university’s 36th annual Mountain Heritage Day festival. The awards were presented by Scott Philyaw, director of WCU’s Mountain Heritage Center, and Clifton Metcalf, WCU vice chancellor for advancement and external affairs.  Bryson’s three daughters – Norma Clayton and Anna Allen, both of Sylva, and Carolyn Wiggins of Cullowhee – accepted the Mountain Heritage Award on their mother’s behalf.

Annie Lee Bryson was known in the region as the “Corn Shuck Doll Lady” for her work in corn shuck crafts.  Born in 1921, Jackson County native and Cane Creek community resident Annie Lee Potts Bryson was well known in the region for her work in carrying on the traditional craft of making corn-husk dolls.  When World War II loomed on the horizon, Bryson became involved with the National Youth Administration program, joining other young women in making mattress covers for soldiers. Frances Nicholson, another Jackson County native, was the supervisor, and during their lunch hour she taught Bryson how to make many items from corn husks, or as they are also commonly called, corn shucks.  “I learned how to make sandals, mats and hats from Frances,” Bryson once said. “But most importantly, Frances taught me how to make the oldest doll known in America, the corn- husk doll. I really loved to bring the dolls to life.”

Bryson married in 1950, and she and her husband had three daughters. Over the years, she continued making corn-husk dolls and other handicraft items. In 1972, Bryson became involved with Balsam Originals, a nonprofit cooperative sponsored by Mountain Projects, a federal agency serving low-income residents in Western North Carolina. Local families were able to earn extra income selling handmade crafts through the co-op. As a volunteer for Balsam Originals, Bryson brought members of the Wayehutta and Cane Creek communities into the craft co-op by organizing craft classes and by making telephone calls and home visits to solicit backing. She became an organizer, instructor, board member and producer for the co-op. 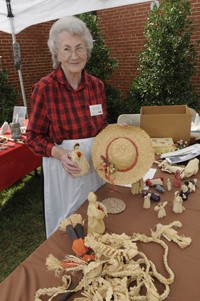 Bryson’s leadership and community involvement did not go unrecognized, as she received the “Woman of the Year” award from the Western North Carolina Development Association in 1973.  In 1976, Bryson was one of nine original crafters who founded the highly successful Dogwood Crafters Co-op in Dillsboro. She also demonstrated at numerous craft festivals and was  a regular participant at Mountain Heritage Day from the festival’s beginnings. For several years, she demonstrated her craft at the Mountain Life Festival, held at the Mountain Farm Museum in Great Smoky Mountains National Park.

Many of her corn-shuck items won prizes at local, regional and state competitions. In 2008, Bryson was recipient of the Britta Holland Memorial Award, which was presented by the Appalachian Farmstead and Catch the Spirit of Appalachia in recognition of her work in continuing mountain crafts and culture.

Bryson’s three daughters – Norma Clayton and Anna Allen, both of Sylva, and Carolyn Wiggins of Cullowhee – accepted the Mountain Heritage Award on their mother’s behalf. 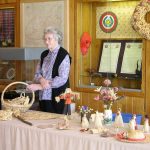 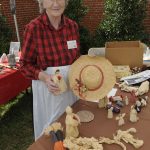 Annie Lee Bryson with a sampling of her cornshuck crafts at Mountain Heritage Day. 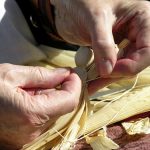