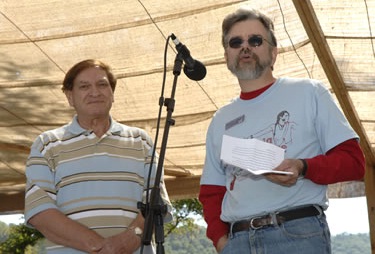 Western Carolina University presented its Mountain Heritage Awards for 2007 on Saturday (Sept. 29) to the “dean” of Western North Carolina fiddlers and to a traditional dance group that is re-creating the ancient dances of the Cherokee in performances throughout the United States and overseas.

A native of Madison County, Freeman began playing the fiddle at an early age and was first taught by his older brother, the late Gordon Freeman. As a 14-year-old, Arvil Freeman was invited to perform on a tour of the Midwest by Bascom Lamar Lunsford, founder of Asheville’s Mountain Dance and Folk Festival, but a health problem ended his participation two weeks into the tour. When he was still 14, Freeman began his professional fiddling career with the Green Valley Boys at radio station WCYB in Bristol, Tenn. Following a tour in the military, he decided to play his fiddle in his native Western North Carolina, despite offers for employment from bluegrass stars Bill Monroe and the Stanley Brothers.  Over the years, Freeman served stints with the Piney Mountain Boys and the legendary Reno and Smiley, and for 14 years in the 1970s and 1980s he performed five nights each week with the Marc Pruett and 40 West bands at a downtown Asheville restaurant.

Freeman has performed for 11 years with the Stoney Creek Boys, house band for the Mountain Dance and Folk Festival, and Asheville’s Shindig on the Green. Over his 57-year musical career, he has played on more than two dozen recordings and has received many honors for his musicianship. For the past three decades he has taught the fiddle to a steady stream of young musicians who are carrying on the WNC fiddling tradition.