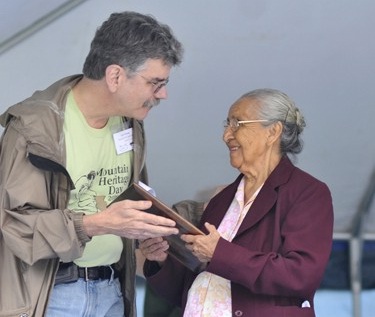 Amanda Swimmer is one of the best-known pottery-makers among the Eastern Band of Cherokee Indians. Born in 1921 and mother of seven children, she lives and works in the Straight Fork section of the Big Cove community on the Qualla Boundary.

By trial and error, she developed her expertise in making open-pit fired pottery. “After I got married, I decided to hunt that clay right above where I lived,” she recalled. “I made some small bowls, and I told my husband, I said, ‘Let me try to burn them. Just make a hole right there in the yard.’ We just piled wood in there and burned my pottery. And that came out pretty good. And I just kept on playing with that wood, off and on.”

She works in a pottery tradition that was almost lost in the years following the removal to the west of most of the Cherokee tribe during the nineteenth century. Tribal potters who were still active at the turn of the century, ethnologists and art historians who documented their wares, potters from the adjacent Catawba tribe, and subsequent generations of Cherokee potters have all played a role in preserving and reviving the tradition of Cherokee pottery that Amanda Swimmer’s work represents.

Her pottery-making techniques are ancient. has never used a potter’s wheel. Instead, she pots and bowls, often beginning with coils of clay. She uses traditional techniques for smoothing and shaping, then presses designs into the clay with wooden and bone paddles, sea shells and smooth rocks. After drying the pieces in the sun, she fires them in an open pit. The woods she chooses for determine the final . Hardwoods produce less smoke and thus a lighter . Soft poplar, which she often uses, produces a thick smoke and a dark finish.

“If I want to make them all different in brown, I usually get this oak and hickory and locust – locust gives you hot heat, it burns hot, and it gives you an orange ,” Swimmer said. “And if you mix oak and maple and birch, that gives you a spotty , and sometimes it gives you a picture on the bowl, too. It might be black or brown. You never know how they’re going to turn out.”

Amanda Swimmer’s expertise in working with clay has won her national recognition and many awards, including the North Carolina Heritage Award in 1994. She has demonstrated pottery making at the Oconaluftee Indian Village in Cherokee for more than 40 years. A founding member of the Cherokee Potters Guild, she is helping to preserve pottery traditions through her teaching at Cherokee Elementary School. She also has offered many workshops and demonstrations at other schools throughout the region. Pottery making has been important to her people, and she wants to carry on the tradition.“I always think about my old ancestors, and I ought to just keep going and keep making pottery and teaching others to make pottery,” she said. (Information courtesy of the Program of the North Carolina Arts Council)