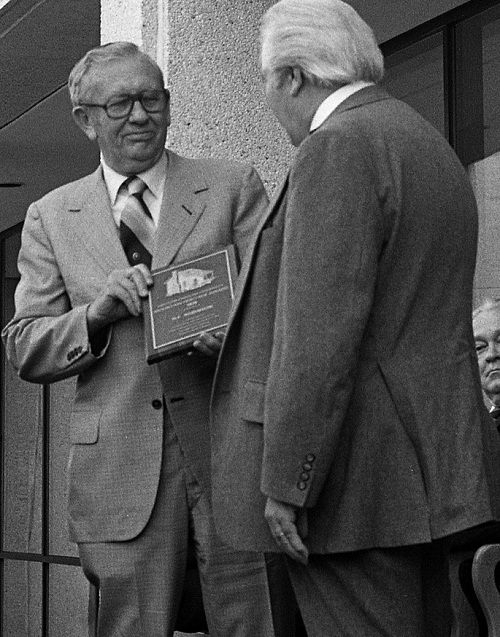 Standing before the new structure and addressing some 300 persons at the dedication, Parris said we are standing “at the threshold of an era” when WCU, hand in hand with the University of North Carolina and the people of this region, will move to preserve and protect our Western North Carolina heritage.  “This day, this building, this era of commitment are possible,” he said, “because of the deep love for home and hearth, the outward zeal for action, the determination to persevere, and the breadth and scope of vision and understanding of H.F. ‘Cotton’ Robinson.”  “For the accomplishment of this building and this center,” Parris said, “the award could go to no other than Chancellor Robinson.”

Winners of the award are chosen by a special committee, following guidelines laid down when the award was established in 1976. One of the criteria for the award provides that it be made for “outstanding contributions to the preservation or interpretation of the history and culture of Southern Appalachia.”  The presentation represented something of a reversal of roles for the two men. It was Robinson who presented the first Mountain Heritage Award in 1976. The recipient that year was John Parris.  In 1977 the award was presented to the Cherokee Historical Association, and in 1978 it went to Leona Hayes of Asheville.

Others on the program shared Parris’ assessment of the importance of the center, of the day, and of the award.  President William Friday of the University of North Carolina said it was “a memorable day in the life of the university, a day of joy, of thanksgiving, of gathering strength for greater service.”  Friday said he had invited Robinson more than five years ago to come home to his native land to lead WCU to greater achievement in teaching, research and service. “But he knew his assignment required something more,” Friday said, “and that something more was the greater involvement of Western Carolina University in the life of all the people from this region.  “He has succeeded. The completion of this center is a visible, tangible manifestation of that success.”

William Johnson, chairman of the UNC Board of Governors, pointed to the building as proof of the benefits of cooperation between the people, the legislature, the university system, and the board of governors.  “By this ceremony,” he said, “our thoughts are focused  upon one of our most prized possessions: our heritage. It is necessary that we have a full and proper awareness of our heritage of this great region will never neglected.”  State Rep. Liston Ramsey called the administration building a heritage center, “a building that belongs to the people”  “It was the people of North Carolina voting in favor of higher education bond issue in 1976 who financed this building,” he said, “ Just as surely as if they had sent in their dimes and their dollars to pay for it.”

Ramsey said the structure “will help the university to grow, to prosper, and to serve the region much more effectively.”  House speaker Carl Stewart said the center and its director, Dr. Cliff Lovin, have the ability “to make the mountain heritage program a dynamic institution, one which will administer to the needs of this region and one which will preserve the history of this region.“  “We have a lot to be proud of today,” Stewart said. “We have a lot to look forward to.”  James Glenn, chairman of the WCU board of trustees, accepted the building on behalf of the university. Lt. Gov. Jimmy Green was to have spoken at the dedication, but was unable to attend.