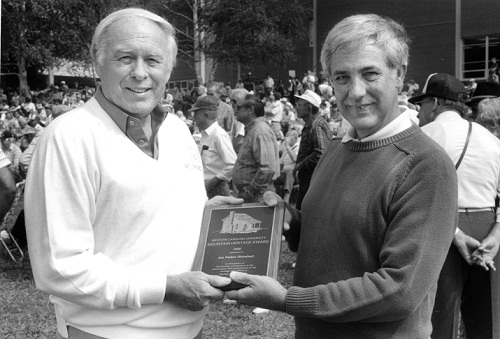 Joe Rhinehart received  Western Carolina University’s 1990 Mountain Heritage Award for his work in  preserving the history of the old Jackson county town of Webster, where he lives.

Rhinehart grew up in Webster, where he attended elementary and high school.  He graduated from Pfeiffer College, received his master’s degree from the University of North Carolina at Chapel Hill, and studied journalism at the University of Oregon in Eugene.  For 27 years he taught English and journalism in the Gaithersburg, Maryland. high school before retiring and returning to Webster.  In 1974, he edited “The Webster Cookbook,” based on early reflections of Jackson county life and food.  He edited “The Poems of Robert Lee Madison,” WCU founder, producing a handset book that won the North Carolina Poetry Society’s Charlotte Young Award.