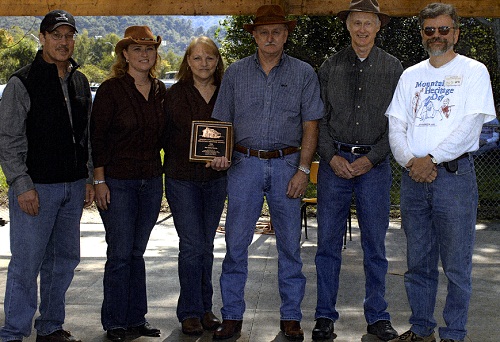 CULLOWHEE – Western Carolina University presented its Mountain Heritage Award for 2006 on Saturday, Sept. 30, 2006 to a family whose roots run deep into the musical heritage of Jackson County and Western North Carolina. 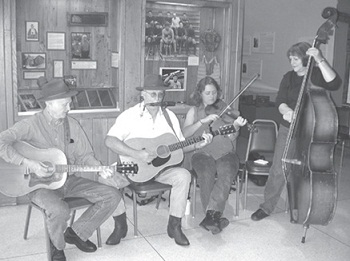 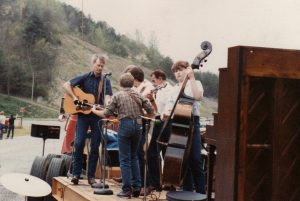 The Dietz preparing to preform at the Savannah Festival, 1985

“The Deitz Family makes mountain music in the best sense of the term,” said Philip Coyle, associate professor in WCU’s Department of Anthropology and Sociology, and editor of the North Carolina Folklore Journal.  “It is the music that gets us off of our couches and down to our church or community center, where we once again come face-to-face with the people who make this place special.”

The family’s music “flows easily from bluegrass to country to old-time fiddle tunes,” Coyle said. “It is rooted in the good taste of generations of musicians who have been more interested in making the kinds of music that suited them than in sticking to one particular style or tradition.”

The Deitz Family is the 31st recipient of Western’s Mountain Heritage Award. The award is given in recognition of outstanding contributions to the preservation or interpretation of the history and culture of Southern Appalachia; or in recognition of outstanding contributions to research on, or interpretation of, Southern Appalachian issues. Award winners are chosen by a special committee.

Saturday, Sept. 30,12:15 p.m., at the Norton Music Stage (Located at the Creek Lot end of the intramural field)

Now we come to the presentation of the Mountain Heritage Award. This is a very important award that Western Carolina University gives each year to a person or organization that has made outstanding contributions to the preservation or interpretation of the history and culture of Southern Appalachia.

This year, the Mountain Heritage Award goes to a family whose roots run deep into the musical heritage of Western North Carolina- the Deitz Family of Jackson County’s Tatham’s Creek community.

Members of the family have been performing string band music across Western North Carolina for more than 30 years, keeping alive the traditional fiddle and banjo tunes passed down to them by a well-known Jackson County musician, the late Harry Cagle, who had learned the songs from Samantha Bumgarner, the legendary Jackson County performer who made some of the first recorded country music in the nation.

The Dietz Family band – including brothers Joe and Bill Deitz; Bill’s wife, Delores; and the couple’s daughter, Chrystal – shares a family lineage that dates back to some of the earliest settlers of Jackson County’s Tatham’s Creek area. Raised in a musical family, Joe and Bill Deitz grew up listening to their parents play music by the light of a kerosene lamp. In 1972, Bill Deitz joined Cagle in the reformation of a group called Harry Cagle and the Country Cousins.

From 1972 through 1990, Harry Cagle and the Country Cousins performed all across Western North Carolina. Over the years, the group grew as Joe, Delores and Chrystal Deitz joined Cagle, Bill Deitz and Phil Stovall on stage. The Deitzes have performed as a family since Harry Cagle’s passing in 1990.

The family’s relationship with Mountain Heritage Day goes back to the festival’s origins. The university held a “Founders Day” celebration on the last Saturday in September in 1974, and one of the music groups performing at that event was a trio that included Harry Cagle and Bill Deitz.

That event became Mountain Heritage Day the following year, and Harry Cagle and the Country Cousins, including members of the Deitz Family, performed at every edition of the festival from 1975 through 1990. The family has appeared at every Mountain Heritage Day since then, and just finished up their performance at our Traditional Music Stage a few minutes ago.

The Deitzes also have taken the stage at the Mountain Dance and Folk Festival, Asheville’s Shindig on the Green, and at the 1982 World’s Fair in Knoxville,Tennessee. Many performances have been in the Jackson/Macon areas at benefits, family reunions, nursing homes and school festivals. 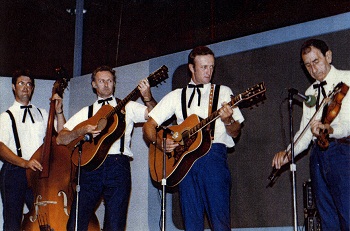 Ted Coyle, a member of our anthropology faculty and editor of the North Carolina Folklore Journal, said this about today’s honorees:

“The Deitz Family makes mountain music in the best sense of the term. It is the music that gets us off of our couches and down to our church or community center, where we once again come face-to-face with the people who make this place special.

“The family’s music is rooted in the good taste of generations of musicians who have been more interested in making the kinds of music that suited them than in sticking to one particular style or tradition.”

We are honored to have the Deitz Family here to accept the award.

Western Carolina University and the Mountain Heritage Center is pleased to announce that the Deitz Family band is the recipient of the 2006 Mountain Heritage Day Award. This award is presented annually to a person or group that has made outstanding contributions to the preservation or interpretation of the history and culture of Southern Appalachia.

For over thirty years, the Deitz family of Jackson County has played stringband music across western North Carolina. Comprised of brothers Joe and Bill Deitz, Bill’s wife Delores and their daughter Chrystal, the Deitzs’ have deep roots in the Little Savannah area dating back to some of the original settlers on Tathams Creek.

The family has always had a musical bent.  Joe and Bill’s parents, David and Ruby Cabe Deitz sang and played gospel tunes on a number of different instruments.  The family would often sit at night in the kerosene lamp lit living room of their Tathams Creek home as David sang and played the organ or harmonica. Among other musical relatives, the brother’s uncles, J. C. and Waye Cabe also played and sang old folk and gospel songs. 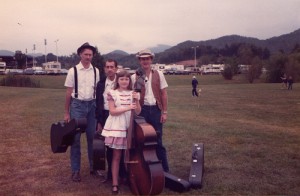 The Dietz family in Robbinsville, 1984

In 1972, Bill Deitz joined Harry Cagle to form a group called “Harry Cagle and the Country Cousins.” Harry had learned to play banjo from legendary Samantha Biddix Bumgarner. In the 1930s and 40s, he had played for John R. Brinkley’s radio programs, for the Big Chief Medicine Show, and for local radio stations in Sylva, Waynesville, and Asheville. Harry and four other Jackson County musicians formed a group called “The Country Cousins” in the early 1960s. This group performed the old mountain fiddle and banjo music Cagle had learned years earlier from his family, Samantha Bumgarner, and from other old timers. Bill Deitz helped reform this group with Harry and they called themselves “Harry Cagle and the Country Cousins.” In 1974, Western Carolina University held a Founders Day program on the last Saturday in September. Harry, along with Bill Deitz and Joe Butkovich from East Fork, made music at that event. “The Country Cousins” grew as Joe, Chrystal, and Delores soon joined Bill, Harry, and Phil Stovall. They performed together through 1990 until Harry passed away.

The Deitz’s have preserved the old time tradition of learning music with their family and then passing it on whether on street corners, family gatherings, or at various types of benefits, Much of their latter type of work has been in the Macon/Jackson county area at cakewalks, weddings, small festivals, nursing homes, and school events. Cakewalks are a type of benefit that probably grew out of the old tradition of having box suppers. The Deitz’s participated in many benefits hosted by the late Lyman Powell. These events involved thirty minutes of music by the band as people gathered. The crowd was then “loosened up’ by a cakewalk. Next, some of the best cakes and donated merchandise was auctioned off. This was followed by another cakewalk to dispose of remaining items followed by a drawing to determine raffle and door prize winners. More music and dancing followed as the fundraising portion of the event drew to a close.

Some of the family’s work has been as a group and some has been as individuals or pairs. The Mountain Heritage Center, for example, has often hosted just Bill and Joe for youth programs that particularly need their educational skills, musical ability, and charm. East Franklin Elementary hosted a sleep over for special education children for a number of years and the Deitz Family regularly made music for this event.

The Deitz family used to play virtually every weekend, but they have purposely slowed down as the elder Deitzs have neared retirement age. Joe, Bill, and Delores and various neighbors still get together and play every Sunday, Chrystal has moved to Tennessee. An accomplished banjo player she also plays the bass, mandolin, and fiddle. She got her start when she was 9 years old and participated and learned while the family performed with Harry Cagle. Chrystal still comes back to perform with the rest of the family from time to time. She also plays with a band in her new hometown.

In addition to playing at every Mountain Heritage Day, the Deitzes also have taken the stage at the Mountain Dance and Folk Festival, Asheville’s Shindig on the Green, at the 1982 World’s Fair in Knoxville, Tennessee, and at many festivals, concerts, and benefits in the region.