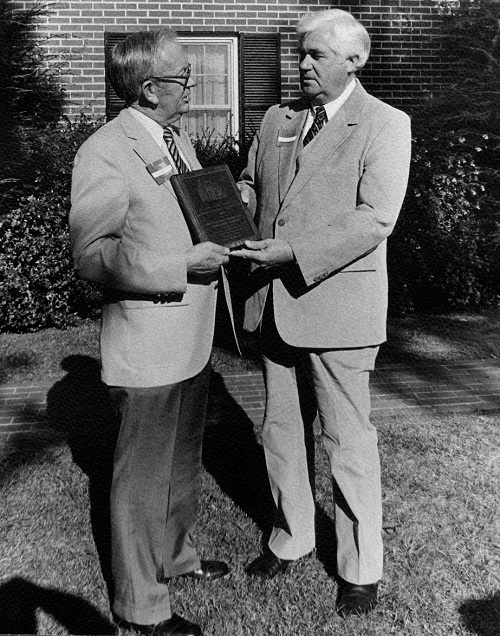 Recipient of the Mountain Heritage Award 1981.

Western Carolina University gave its 1981 Mountain Heritage Award Saturday to the Asheville Citizen-Times Publishing Company as the “greatest historian of the mountains.”

In a citation accompanying the presentation, Dr. H.F. Robinson, WCU Chancellor, said the newspaper not only has served as the daily recorder of human events but “has purposefully and with commitment undertaken to record and recall the great historic moments in life of the mountains in life of the mountain people.”  The award, presented annually during the celebration at WCU of Mountain Heritage Day, was accepted by Richard B. Wynne, president and publisher of the Citizens-Times.

Wynne said the award is “a unique honor and one we will be very proud of at the Citizen-Times.”  He added that “it is one thing to be recognized by our peers in business; it is quite another to be cited by our neighbors for preserving regional values.”  “It is the people at the Citizen-Times who are responsible for this honor and I am delighted to accept this award on behalf of each of them.  In our acceptance, we recognize that we have a responsibility to our heritage to do our very best for this region and its citizens.  We will do our utmost to live up to this challenge.”

The newspaper traces its beginnings to February 1870 when Randolph Shortwell began publishing the North Carolina Citizen in Asheville.  From its early years, the paper undertook periodically to publish special editions on the history of the region, an activity that the WCU citation said “flowered in the second half” of the 20th century.

A bronze tablet presented to Wynne read “Western Carolina University Mountain Heritage Award, 1981, presented to the Asheville Citizen-Times Publishing Company in recognition of outstanding contributions to the preservation and interpretation of the heritage and culture of Western Carolina.”  The accompanying citation noted that “On (its) pages… are found accounts of great events, and small; of expectations, and disappointments; of success, and failures; of war, and peace; of happiness, and misery; of prosperity and poverty; of tranquility, and violence; indeed, accounts of all of the human scene.”

The Citizen-Times was described as a “moving force in the historic achievements” of Western North Carolina, as well. Thus, the award not only was in recognition of the newspaper’s role as historian but for its sponsorship of historic accomplishments.  The newspaper “championed the introduction of the railroad to the mountains; encouraged aviation; fought for better roads; was a leader in the establishment of the Great Smoky Mountains National Park and the Blue Ridge Parkway; searched for industry; campaigned for clean government; sought better educational opportunities and resources; encouraged morality and raised its voice against oppression, disease, lawlessness, and corruption.”

In truth, Robinson said, in a reference to the Citizen-Times’ slogan, “it has dedicated itself to these and many other other causes directed toward the upbuilding of Western North Carolina.”  He also recognized the Citizen-Times “commitment to recording the history of Western North Carolina, already firmly established in the first half of the 20th century, flowered in the second half, beginning with similar editions periodically since.”  This commitment, he said, “is seen each week today in the column, ‘Roaming The Mountains,’ by John Parris, and in the publication of his books.”