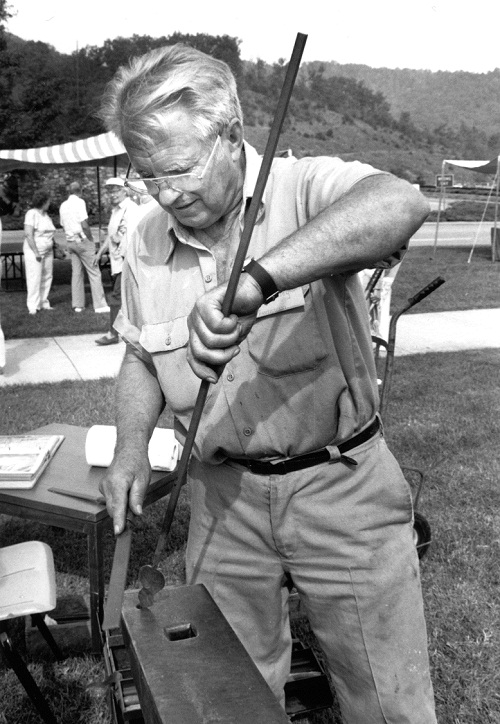 Bea Hensley had a good excuse for not being present. He was at the White House in Washington, D.C., where he was honored with a 1995 National Endowment for the Arts National Heritage Fellowship Award.

“Today we recognize a truly outstanding artisan whose art and technique stem from ages past and whose virtuosity bears the mark of one of America’s best known heroes. Bea Hensley learned his craft from Daniel Boone VI, a direct descendent of the famous frontiersman,” Bardo said.

The son of a Baptist preacher, Hensley was born Dec. 9, 1919, at Higgins Creek, Tenn. His family moved to Burnsville in 1923, where Hensley became acquainted with and eventually began the apprenticeship with Daniel Boone VI who operated a forge in the Yancey County town.

Boone helped Hensley become familiar with the anvil, forge and other tools of the blacksmithing trade. Hensley was also taught the ancient “hammer language,” a communication between the blacksmith and his striker, or assistant that was based on the rhythm of their rapidly striking hammers.

Hensley learned blacksmithing as the craft was being transformed by modern inventions. Much of the work of the old-time blacksmith centered on the hardware used in agriculture, but in the early 1900s automobiles and tractors began to take the place of draft horses. Some blacksmiths left the profession, and those who kept the tradition alive often found the demand for their services was in ornamental iron work, rather than utilitarian blacksmithing.

Bea Hensley’s work is on display at the North Carolina Museum of History and the Smithsonian Institution. He has been featured in numerous publications, including National Geographic and Southern Living, and was honored in 1993 with a North Carolina Folk Heritage Award.

Hensley is the 20th recipient of WCU’s Mountain Heritage Award, which reflects outstanding contributions to the preservation or interpretation of the history and culture of Southern Appalachia, our outstanding contributions to research on, or interpretation of, Southern Appalachian issues. Award winners are chosen by a special committee.