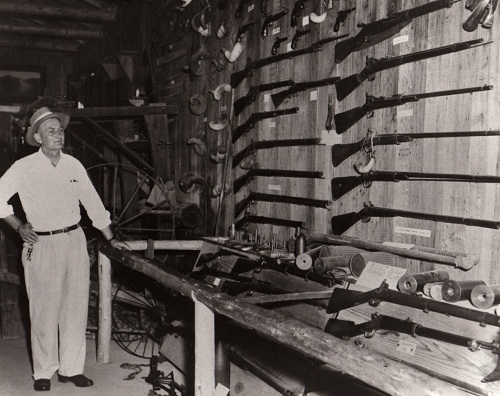 CULLOWHEE – Western Carolina University’s 1983 Mountain Heritage award went Saturday to John Bascomb Battle, an 86-year-old native of Jackson County who has spent a lifetime putting together a rare and all-inclusive collection of tools and wooden artifacts our mountain forebears made with them.

In a citation accompanying the presentation, WCU Vice Chancellor Dr. James E. Dooley, acting in absence of Chancellor Dr. H.F. Robinson, said that Battle is “a man who has provided us with a strong link to the past, and the future has already been assured.”

Presented annually during the celebration of Mountain Heritage Day at WCU, the award came as a complete surprise to the retired Whitter merchant, who is an alumnus of WCU.  Because of the significance of the day and being a graduate of WCU, his wife Verna had suggested that they drive up to Cullowhee and take in all the festivities.  So it was that he came to be standing on the lawn of the Chancellor’s Residence at mid-afternoon with others to witness the award ceremony and hear the announcement of this year’s recipient.

In leading up to the magic moment, Dr. Dooley pointed out that since the award was established in 1976, it had gone to authors, to preservers of mountain folk music and dance, to those who have helped keep alive in unique ways the Indian and pioneer heritages of our region, and to the region’s largest newspaper.  “Public awareness of things ‘mountain’,” he said, “has never been more widespread than it is today. We observe all about us the proof as young people and their elders alike admire, respect, and enjoy the arts, crafts, and social activities that reveal effectively so much of the character and fiber of those who came before us in these hills.

“And why,” he asked, “wouldn’t we all have the good sense and judgment to recognize that what we have seen today in this very special celebration of mountain ways is worth keeping and passing on to each succeeding generation.”  “But,” Dr. Dooley said, “It has not always been this. Not too many years ago it would have required unusual insight to set much store in a way of life that was regarded as hard and trying and, in the eyes of many, beginning to pass to better times.”

“Very few among us,” he said, “saw clearly enough that, without some foresight and appropriate and timely steps, the tools, implements, instruments and devices so common to everyday life that so vividly distinguish the pioneer era would soon be lost forever.  “Our award today goes to a man who had that foresight a man who early on, sensed the need to do what he could to save as much as possible before it was too late. He placed an uncommon value on what to others were common things. And by so doing he has provided a means by which the lives of many others may be enriched.

“Through almost 50 years of determined and persistent effort,” Dr. Dooley said, “our recipient has gathered one of the most impressive collections of artifacts from this region that exists. And we thank him for what he has done.”

Then came the moment the crowd had awaited.  “We take great pride,” he said, “in presenting the 1983 Mountain Heritage Award of Western Carolina University to John Bascombe Battle.”  Then he asked Mrs. Battle to join her husband in the presentation “because she has been a true support and helpmate in this life long endeavor.”

The bronze tablet Dr. Dooley handed to Battle read:  “Western Carolina University Mountain Heritage Award 1983 presented to John Bascombe Battle in recognition of outstanding contributions to the preservation and interpretation of the heritage and culture of Western North Carolina.”

In 1951, while Battle was still operating his mercantile business at Whitter, he erected a hand hewn log building in the Ela community as a museum facility to house his collection and hired a man to run it, which was open to the public.  Ten years later he retired from his mercantile business and devoted full time to his collection. He closed the museum in 1970, sold the building, and stored the collection.  Battle’s most prized piece includes a hand-made walnut cupboard made by the Rev. Ulrich Keener, the first Methodist Missionary to the Cherokee Indians, and a muzzle loadin’ rifle created by Salali, the blacksmith of the Cherokees and the first Indian gunsmith in America.  The Only other Salali rifle gun known to exist is in the Smithsonian Institution in Washington. 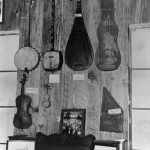 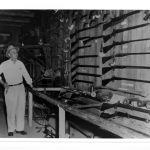