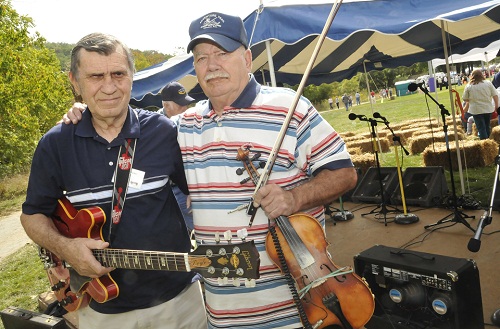 Winners are chosen by a special committee, following guidelines set when the award was established in 1976. Recipients of the 2008 Mountain Heritage Awards are:

Both fiddler Gar Mosteller and guitarist Doyle Barker were raised in rural Cherokee County. The musicians got together often to perform as a duo in the 1950s, and then the two were reunited in a performance at the 1990 edition of Mountain Heritage Day. They have been regular performers at the festival since then, performing their version of “Appalachian swing,” a combination of mountain hoe-downs, pop standards, sentimental songs and Western swing.

Born in Andrews, Mosteller is the son of a fiddler, and his family included many other gifted musicians. Following World War II, he began playing for dances at the Andrews Town Hall, sometimes performing “twin fiddles” along with his brother. 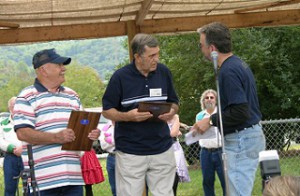 By the time he was 17, Mosteller was being heard on a program called “The Georgia Jubilee” on Atlanta radio station WGST. He also was performing for radio station WQAM in Miami, and eventually earned a place in the house band for the “Louisiana Hayride,” which was broadcast on KWKH in Shreveport, La., where he backed up country music stars such as Lefty , Slim Whitman, Ray Price, Faron Young, Minnie Pearl and Webb Pierce.

Born in the Sweetwater community, Barker mastered the finger-style guitar playing technique made famous by Chet Atkins and Merle Travis. After performing with Mosteller for several years, Barker began playing with a local country band, the Fontana Ramblers, and he also was a member of the house band for the Georgia Mountain Fair, along with Howard Cunningham and Don Fox.