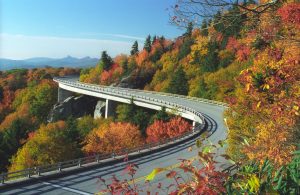 The last section of the Blue Ridge Parkway to be constructed was the Linn Cove Viaduct that crosses Grandfather Mountain near Blowing Rock, North Carolina. While the rest of the Parkway was completed in 1967, environmental and private property issues delayed the Linn Cove project until 1979. When planners proposed to route the Parkway over the top of Grandfather Mountain, its owner Hugh Morton resisted. He believed that route would damage both the value of his tourist attraction on the mountain as well as the mountain’s sensitive ecology. Eventually a lower route was selected. To minimize environmental damage, the road is carried on an S-shaped 1,243-foot viaduct running high above the mountainside. This engineering marvel provides a spectacular ride that appears to float in thin air.