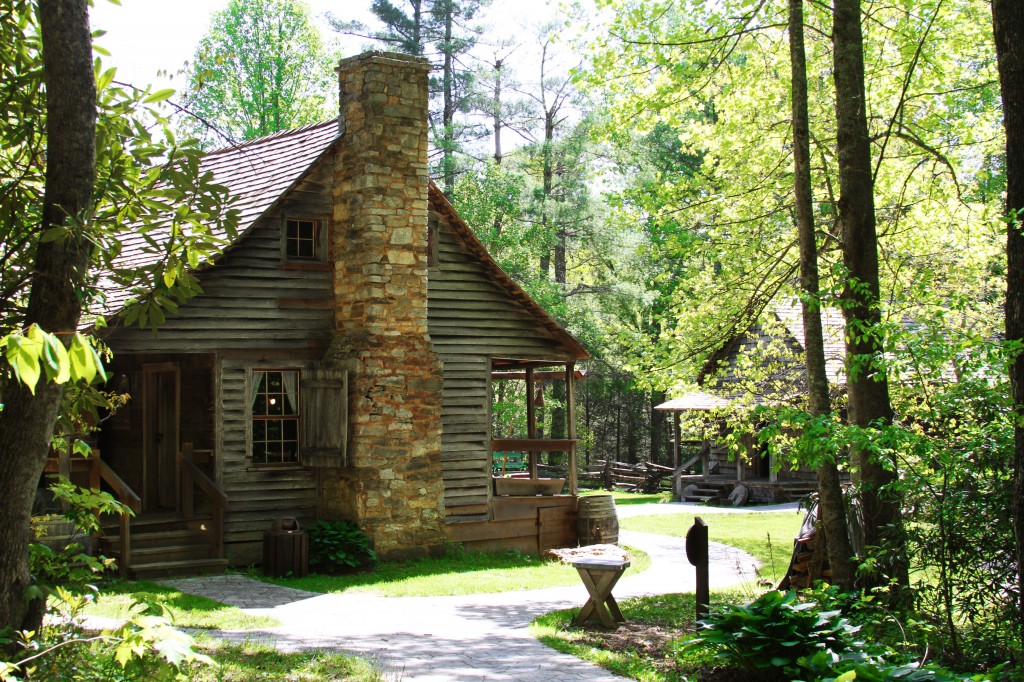 In the early 20th century, the Appalachian forest was subjected to devastating large-scale commercial exploitation for the first time. At the same time, pioneering conservationists were devising reforms for forest management.  In 1889, George Vanderbilt hired a young European educated forester, Gifford Pinchot, to care for the vast woodlands around the Biltmore Estate. When Pinchot left to pursue his work at the national level, Vanderbilt hired a German forester, Dr. Carl Schenck, to replace him.  Schenck created the first school of forestry in America, the Biltmore Forest School. Though the school closed after 14 years, its influence endured. In 1968, Congress established the Cradle of Forestry in Pisgah National Forest as a National Historic Site to tell the story of America’s efforts to preserve its great forest

The Cradle of Forestry

The Cradle of Forestry

Planning his Biltmore Estate in the late 1800s, George W. Vanderbilt hired Frederick Law Olmstead to create several acres of magnificent gardens and to design the terraces and grounds adjacent to the main house. Olmstead is also well known as the person who designed New York’s Central Park and the landscape around the Capitol Building in Washington D.C.

At Olmstead’s recommendation, Vanderbilt next hired Gifford Pinchot to manage the estate’s additional acreage – approximately 125,000 acres of rugged Appalachian forestland. At the time there were fewer than ten individuals in the nation with any formal forest-management training – and they had all received that training in Europe. Pinchot’s arrival in Western North Carolina marked the beginning of “scientific forestry” in the United States. Soon after beginning his employment at Biltmore, Pinchot was selected to become the director of the newly formed USDA Forest Service. Pinchot suggested Vanderbilt hire as his successor Dr. Carl A. Schenck, of Germany’s University of Darmstadt. Schenck’s arrival in 1895 began a tradition of regional scholarship, preservation, and conservation that eventually evolved into the Pisgah National Forest’s Cradle of Forestry.

With Vanderbilt’s support, Dr. Schenck founded the Biltmore Forestry School in 1898. Classes first met in the village of Biltmore, upstairs in what is now the headquarters of the Biltmore Company, a building now registered as a National Historic Landmark. Eventually classes were moved to the Biltmore Estate. As the season warmed, classes were conducted within what would become the Pisgah National Forest. There was a community deep in that forest named “Pink Beds.” Many of the old mountain cabins and farm homes within this community became the “campus” of the Biltmore Forest School. One building, a single-room community school and church, served as the forestry school’s classroom.

At the school, students were taught the management methods needed to utilize and conserve forest resources in order to create a continual supply of goods. It was Vanderbilt’s vision that the Biltmore Estate develope and maintain a high degree of self-sufficiency. At the Biltmore Forest School, science and nature combined to satisfy this vision. Some of the nation’s first examples of controlled logging resulted from the school’s efforts and successes. One observer called the process a beautiful illustration of how the Industrial Revolution could coexist with great forests. However, the school’s existence was about to change.

George Vanderbilt died in 1914. Soon after, his widow sold over 100,000 acres of timberland to the United States government. Consequently, the Biltmore Forest School lost its “natural classroom.” After more than a decade of training students in timber and water management, the school closed. During its life, the school had graduated over 350 students. By the time the Biltmore Forest School closed over 60 universities in the nation offered classes in silviculture (the cultivation of forest trees).

In another way, the huge land sale proved beneficial. The federal government used its purchase of the Vanderbilt tract to lay the groundwork for the eventual establishment of the 500,000-acre Pisgah National Forest. In addition, a 6,500-acre site was set aside to commemorate the beginning of forestry conservation in the United States. Today, that site is the home of the Cradle of Forestry.

The Cradle of Forestry enables visitors to experience Appalachian mountain life as it would have been at the turn of the 20th century. Local crafters recreate the skills that would have been required for survival by the residents of the rugged region during that period. Along a one-mile route called the Biltmore Campus Trail visitors can interact with spinners, weavers, woodsmen, quilters, toymakers, basket makers, and blacksmiths.

The Cradles’s other tributes to its heritage include an 18-minute movie that tells the story of the birth of scientific forestry management. It acknowledges the activities and contributions of Vanderbilt, Pinchot, and Schenck. In addition there are an interactive exhibit hall, a gift shop, and a café. Seven historic buildings remain standing on the site, nestled beside an old sawmill and a 1915 Climax logging locomotive. An excellent reconstruction of the first building that housed the field school for the Biltmore Forest School is located along the historic trek. The Cradle of Forestry is a designated National Historic Site. Recently, it conducted a special event celebrating 100 years of forestry education in the United States, 1898-1998.

The Cradle of Forestry Historic site is located on US Hwy. 276 in the Pisgah National Forest in Transylvania County only 14 miles above Brevard, NC. It is between 30-45 miles away from the towns of Asheville, Hendersonville and Waynesville. It is only four miles off of the Blue Ridge Parkway near milepost # 411. (Look for signs to Brevard)