“Quilts tell stories; they illustrate history; they express love and sorrow; they link generations together; they are community; people gather to make them and experience them; they are art; they teach. Quilts matter!” ~The Alliance for American Quilts.”

Coverlets and Quilts from Digital Heritage {dot} Org on Vimeo.

Few things warm the senses, mental or physical, like a handmade quilt. For hundreds of years, quilts have been crafted, treasured, snuggled, and displayed with dedication and devotion. A special quilt often symbolizes some of our earliest memories; either from the warmth it generated, or perhaps for the family or regional heritage it represents. Quilting has actually enjoyed two distinct lives: one originated several hundred years ago when sewing was as much a necessary survival tactic as growing crops and raising livestock; the other originated early in the 20th century when machine-made blankets began to replace handmade quilts. It was at that time that quilting became an art form and, many would argue, surpassing other heritage crafts.

Handmade quilts added comfort to pioneer life. A thick, warm quilt provided a gentle softness in a harsh, often difficult existence. However, beyond the essentialness of the task, quilting soon became a of love. For generations, men and women shared various rural tasks like and planting. In other parts of life, distinct gender roles were more strictly defined–and assumed. Consequently, the responsibility of quilting and sewing often fell to women. Still, the task was far from an assignment; more frequently it was a choice. It actually provided a relaxing respite from a long day. It gave women a rare opportunity to get off their feet. While quilting could provide individual “downtime,” frequently it played a much more social role. Family members often joined in. Friends would stop over and work on a quilt together. An active quilt frame was the perfect vehicle for social exchange. In such gatherings, it was common to hear singing, chatting, even spirited arguments about various topics–all while many hands were humming together in cooperative harmony. These quilting bees were important events bringing together community women to accomplish a goal while enjoying and each others’ company 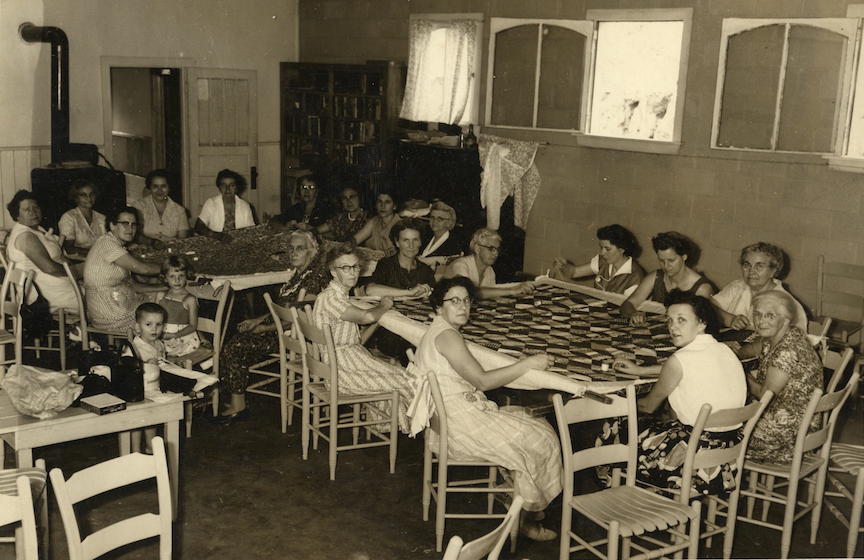 Addie Community Quilting Bee in the 1950s. Photo courtesy of the Sylva Herald and Joe McClure.

In early Appalachia, just about any piece of scrap fabric would find its way into a quilt. Cloth feed sacks were used so frequently that manufacturers soon abandoned the traditional depictions of livestock and grain and began to decorate them with attractive domestic designs. Quilts soon evolved into a form of expression. They evolved into true works of art and often became wall hangings rather than merely traditional bedcovers. Individuals were recognized for their ability to create authentic and beautiful symbols of personal achievement.

Local quilting clubs throughout Appalachia became important community organizations. These groups usually adopted various benevolent characteristics. They would gather together to stitch , useful quilts to raffle for church buildings or to help who were down-on-their-luck. Immediately after the Civil War, one North Carolina group crafted quilts to raise money for needy families. Quiltmakers gave of themselves both physically and emotionally. Their creations and contributions applied a comforting addition to virtually every aspect of Americana in the 18th and 19th centuries. Trivia can be fun … The “Cat on the Quilt” is a folk custom by Appalachian quilters of placing a cat on a quilt which was being made for a bride’s wedding chest. After being placed in the of the quilt, the cat was tossed into the air. The old folk belief was that the person nearest to where the cat landed would be the next to marry.

By the 1920s, many products traditionally made by hand were being replaced by machine-made items. Quilts were no exception. Blankets created in southern textile factories were found in homes across the land. In fact, the largest blanket manufacturer in the world, Beacon Mills, established its headquarters in Buncombe County along the banks of the Swannanoa River. The necessity for quilting at home began to fade. However, those who were still actively making quilts at the time, though they no longer needed the quilts for warmth, continued the activity because they enjoyed the process. They were determined to preserve this traditional link with their rural, Appalachian heritage.

Quilting developed a new identity, a life of its own. It evolved into a specialized craft and form of expression. Abstract ideas became physical creations representing the personalities of this new breed of quiltmaker. “String” or “Strip” quilting is one of the oldest and most popular techniques still in use. It involves saving scrap pieces of cloth (strings) until a sufficient quantity is collected to create a quilt. Tracing its ancestry to Native Americans, this technique produces designs that are both beautiful and unique. From an existing quilt to a picture in a book to a museum display, modern quiltmakers can get their inspiration from almost anywhere.

Today there are hundreds of clubs and organizations devoted to producing traditional quilts and coverlets. It is easy to get caught up in the fascinating world of quilts and quilting. One particularly interesting exhibit is the Southern Appalachian Quilt Collection currentl

y online at the Mountain Heritage Center on the campus of Western Carolina University. During the last twenty years, the Center has collected over forty quilts representative of the region. Most were made within a 250-mile radius of Cullowhee, North Carolina, between 1850 and 1975. This exhibit can be visited via the Web link below. Whether the quilt is intended to cover a bed, decorate a wall, serve as a gift, compete in a contest, or rest in a closet as evidence of personal achievement, it is an important part of our Appalachian Heritage. This essay was based on information provided by The Alliance for American Quilts, The American Folklife Center, and the Mountain Heritage Center at WCU.