A Corn husk Family from Allenstand, part of the John Parris Collection

Appalachian people, of Cherokee, European, and African origin, all share a long history of making useful and decorative items from the outer leaves of ears of corn, known as cornhusks, or corn shucks. The husks are soaked, shaped, and then dried into the desired form. Cornhusks are also braided, twined, or woven into cordage, baskets, wall hangings, chair bottoms, trays, brooms, hats, shoes, and horse collars. Cornhusk dolls are an especially popular and enduring item. During the Great Depression, many rural Appalachian families tried to increase their incomes by making dolls, brooms, and mats to sell to tourists and to stores. Anti-poverty programs even taught the craft to students. Interest in cornhusk crafts peaked during the Craft Revival of the early 20th century.

While not unique to the Appalachian region, cornhusk crafts enjoyed a special popularity here. In the early 20th century, Allanstand Craft Shop in Asheville featured the works of many western North Carolina cornhusk doll makers.
Margaret C. Revis of Weaverville, North Carolina, developed the “Husk” family of dolls, which were sold at the Allanstand shop during the 1920s and 30s. With Revis’ permission, Allanstand patented the designs in 1930 and received exclusive rights to the dolls for seven years. The patented family of dolls with folksy names such as “Cornelius Husk” and “Maizie” helped popularize the craft. 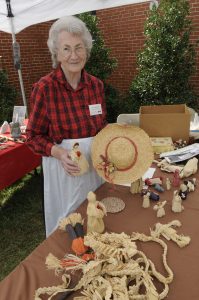 Annie Lee Bryson with a sampling of her cornshuck crafts at Mountain Heritage Day.

Jackson County native Frances Nicholson (1887 – 1990) was one of the most innovative cornhusk artists of the Craft Revival. Nicknamed the “Corn Shuck Queen,” she made fashion items such as hats and handbags as well as traditional dolls. Self taught, Nicholson developed her own unique methods of working with cornhusk, which she passed along to many students through programs such as the National Youth Administration.  Annie Lee Bryson learned from Nicholson and in turn taught many others this ancient craft.

Like Nicholson, May Ritchie Deschamps (1896 – 1982) was an important innovator of cornhusk crafts. Born in Clear Creek, Kentucky into a family of craftspeople and musicians, she made cornhusk dolls as a child. When she moved to Swannanoa in 1943, she began producing dolls for sale at Allanstand, using unique wrapping techniques and non-traditional materials such as jute and raffia for doll hair and accessories. 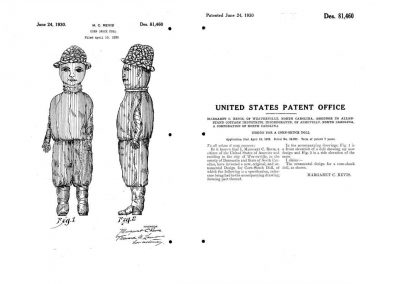 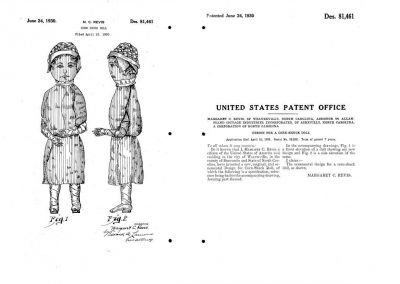